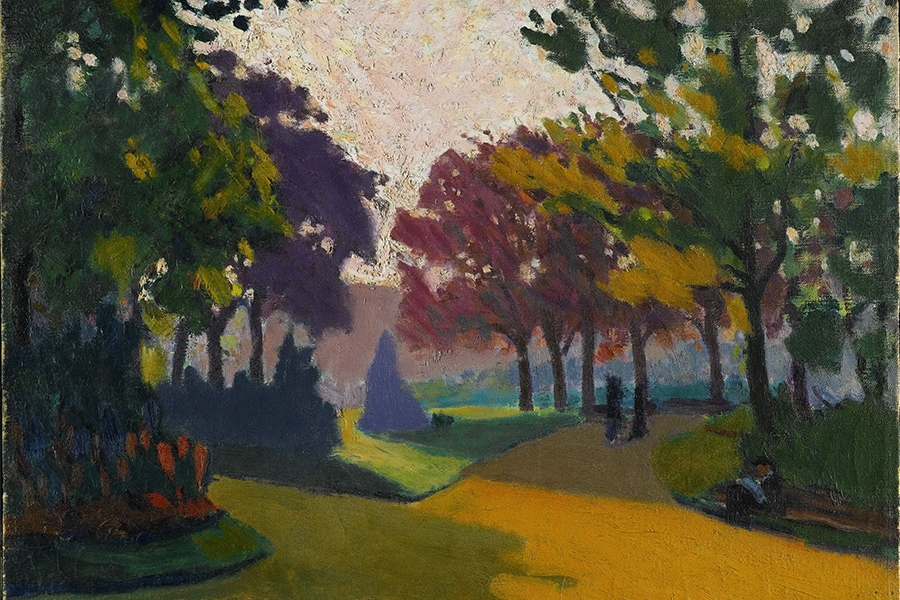 “Marquet and I used to spend the day together. In summer, we didn’t have enough money for a stay in the country. We went just outside Paris to do landscapes. In the afternoon, we went to Arcueil; we painted a street in Arcueil that you can still see today. In the morning, we worked in the Jardin du Luxembourg, not far from the orchard, in a place with very beautiful trees. It was the holidays and a host of kids used to arrive with their nannies: well-brought-up youngsters, no hooligans. They ran from one painting to the other. Marquet and I were each painting our own landscape. We were about twenty-five meters apart. The kids loved to go and find Marquet, but when they saw one of my paintings, they just couldn’t understand what it was.” [1]

In this quote from a 1941 interview with Pierre Courthion, Henri Matisse recalls one of many outings with Albert Marquet to the Jardin du Luxembourg between 1898 and at least 1902, where both artists painted side by side. Matisse and Marquet were close friends. As young men they studied together at the École des Beaux Arts in Paris under the Symbolist painter Gustave Moreau, and by 1897 shared a studio on the Quai Saint Michel. Both artists had started out painting in a relatively conservative, naturalistic manner, but brightened their palette influenced by Impressionism and Divisionism. Around the turn of the century, they both began experimenting with simplification of forms, using stronger colours, and a more aggressive paint application. Along with André Derain and Maurice de Vlaminck, Henri Matisse and Albert Marquet are regarded as the founders of the Fauves movement (French for “wild beasts”), which received its name by 1905.

Marquet’s present painting shows a confluence of walking paths in the Jardin du Luxembourg in Paris, lined by trees of different shapes and sizes, rendered in dark purple, crimson, yellow and green. A man is reading a newspaper on a bench, and two figures, women in long gowns, are walking along the path. Warm autumn light is falling through the foliage, casting long shadows onto the sandy avenue. Marquet left the picture undated. Earlier publications date it to 1898, probably based on the artist’s statement, claiming that in that year “I have only ever painted with pure tones at Arcueil and in the Jardin du Luxembourg”. [2] His later works are usually far more restraint in coloration. Guy Wildenstein, who provided a certificate of authenticity for this work, however, places the work more towards the end of the artist’s career, to the year 1936, unfortunately without further explanation.Comparing Marquet’s Jardin du Luxembourg to other of his works of the same subject, indicates that it rather belongs into the artist’s pre-Fauves phase around the turn of the century.  In 1901, Marquet exhibited four paintings and one pastel of views of the Jardin du Luxembourg at the Salon des Indépendants. One of them was titled Arbres au Luxembourg (no. 648), which could actually be the present painting. Regrettably, no image or dimensions were provided the catalogue, making it impossible to verify.
Also in 1901, Henri Matisse composed a picture of tree-lined path in the Jardin du Luxembourg in flaming colours. It was purchased by the famous Russian collector Sergey Ivanovich Shchukin (1854-1936) and now belongs to the State Hermitage Museum in St. Petersburg, Russia. 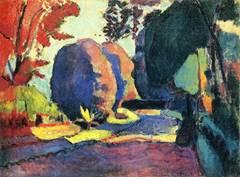 Comparing Marquet’s present picture with this work by Matisse, both are composed in bold, exaggerated colours. The park in both pictures seems to be flooded by the same golden light of dusk or dawn, casting long shadows on the sandy walking path. It might be going too far to suggest that these two works were composed on the same autumn day, while the two artists were working alongside each other, just as described in Matisse’s above quote.

Apart from resemblances in lighting and subject, the two works differ considerably, as both artists were not imitating each other, but in the process of finding their own style. While Marquets rendering of the trees and greenery is still relatively naturalistic, Matisse’s composition is more audacious, his shapes more simplified and his coloration more extreme, probably channeling the manner of Paul Gauguin.

Other works by Marquet of the Luxemburg gardens form around the turn of the century survive in the collection of the Von-der-Heydt-Museum Wuppertal, Germany and in the Musée Bordeaux, France. 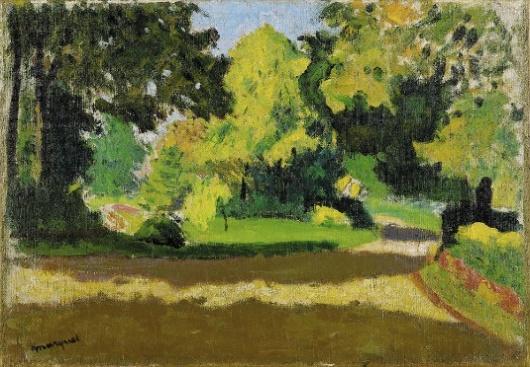 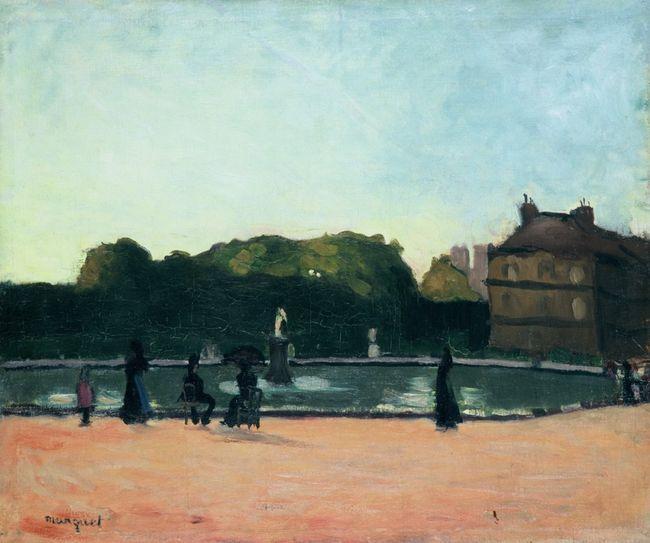 A picture that feels closest to Marquet’s present work in coloration and style, is La Promeneuse, allée du Luxembourg, showing an avenue in the Jardin du Luxembourg, where a lone woman is walking beneath tall trees in the autumn sun. The silhouette of the Pantheon’s dome can be seen in the turquoise mist on the horizion. Marquet executed this work in in radiant colours, using similarly fragmented brushwork for the trees’ foliage as in the present painting. In both works the shapes of the promenading women are equally abbreviated. La Promeneuse, allée du Luxembourg, is dated to 1898-99, and was included in the 1901 Salon des Indépendants exhibition as “Allée du Luxembourg, no. 645”, which would strongly support the dating of our present work to around the same time. 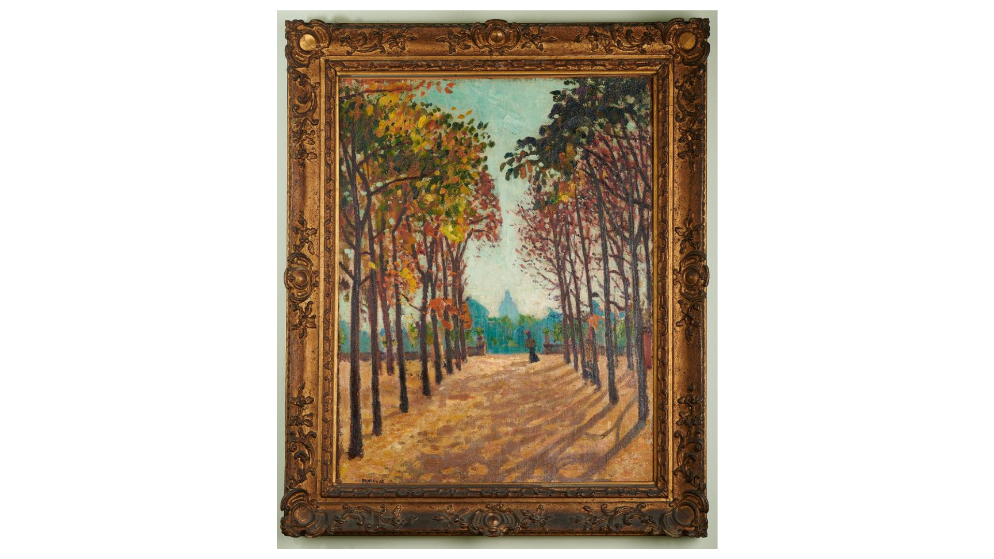