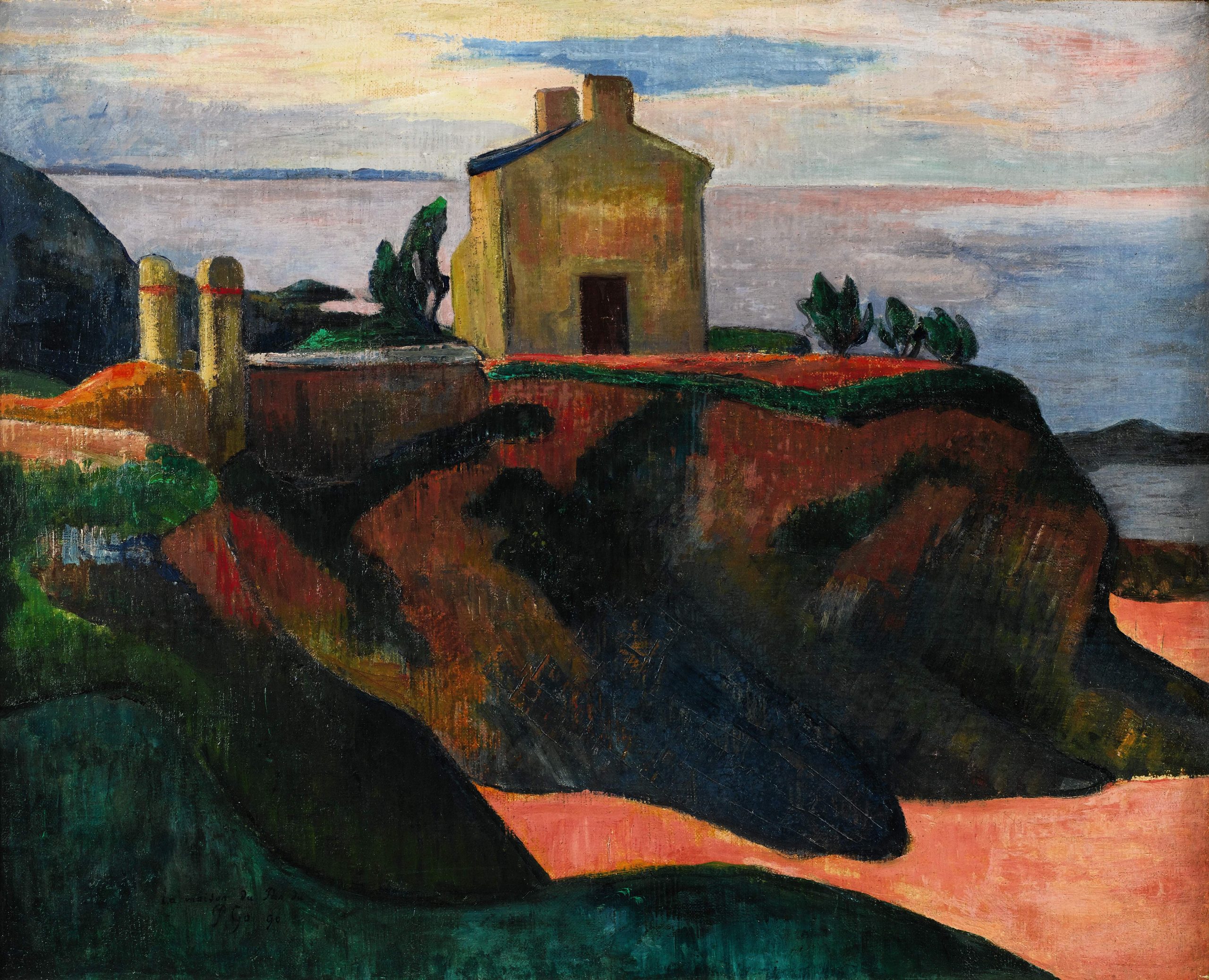 In 1890, Gauguin spent the summer in Le Pouldu, an idyllic hamlet on the Atlantic coast of Brittany, where he painted this vibrantly colourful picture of lonely house, perched on a cliff above the ocean. A postcard dated from around 1900, entitled Le Pouldu  – La Pointe Pan’Mane aux Grands Sables, now the Museum of Pont-Aven, identifies the house standing on a rocky point between the beaches of Grands Sables and Port-Guerrec.  The name Pen Du, misspelled ‘Pan-du’ by Gauguin in his inscription on the painting, means “Black Head” in the local Breton dialect, referring to the outcrop of black granite rocks, typical for the region.[1] 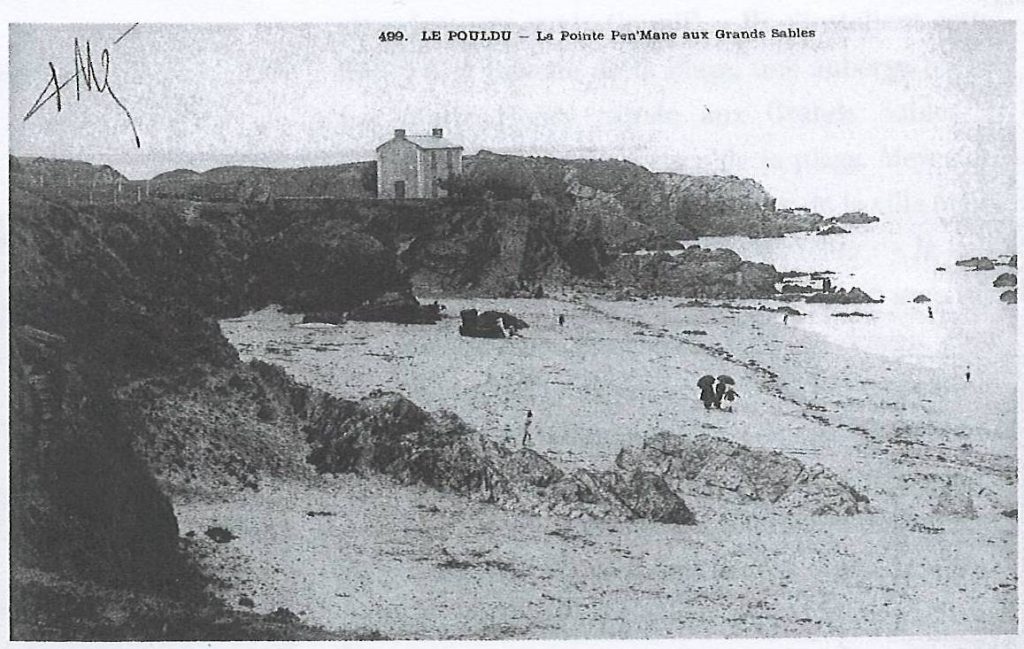 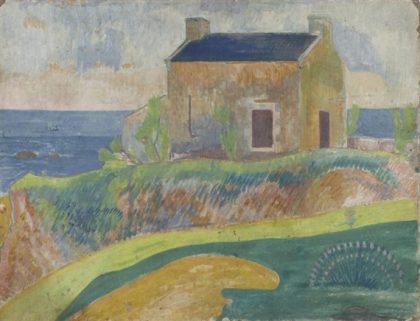 The cottage overlooking the Atlantic apparently fascinated Gauguin, as it appears several times in his oeuvre. Aside from this oil painting, it is also subject of the above gouache, and a few others of his works (W 344, W364, W396). Gauguin was not the only artist who depicted the quaint house above the sea: Paul Sérusier, who stayed with Gauguin in le Pouldu for a while in the summer of 1890, also featured it in his work (Plage au Pouldu, Guicheteau I, 21), as did Charles Filiger (Plage  au Pouldu, c.1890, private collection,  La Maison du Pendu,1890, private collection, and in the background of his Portrait of Emile Bernard from 1893) [2], and Armand Seguin (La Maison du Pen-du, etching, 1893, Bibliothèque Nationale, Paris).[3] The house still stands today and is a designated heritage building. It was erected in 1875 by Henri Louis Froidevaux, a notary from nearby Quimperlé. 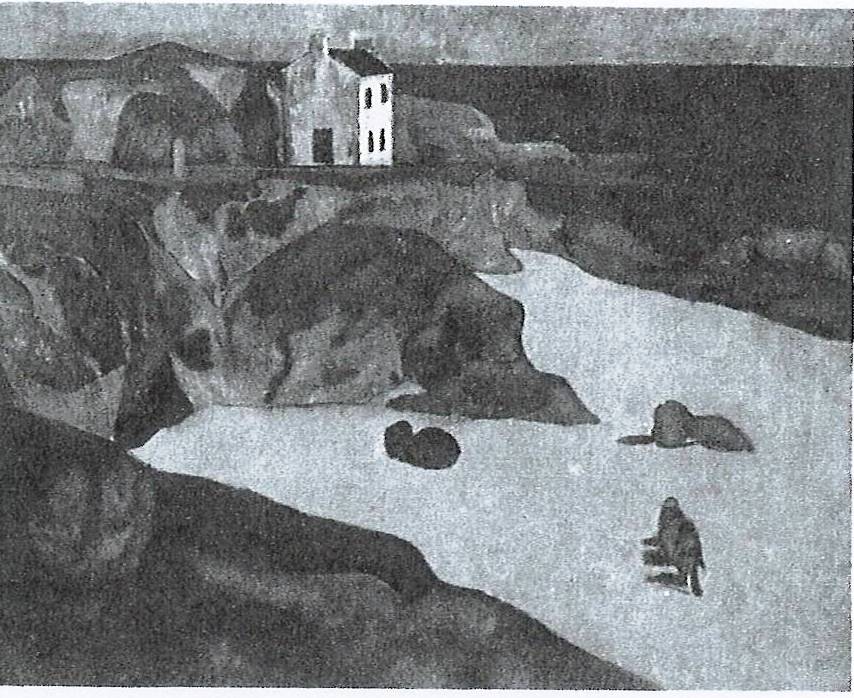 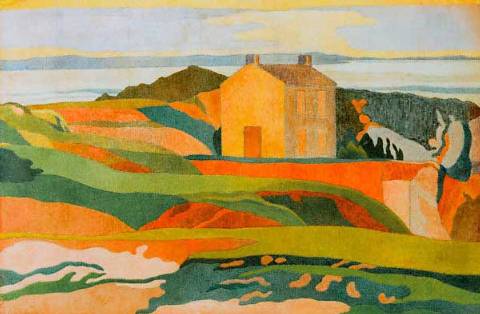 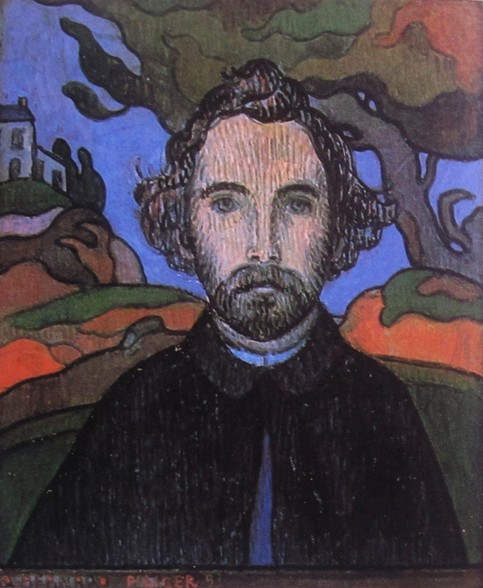 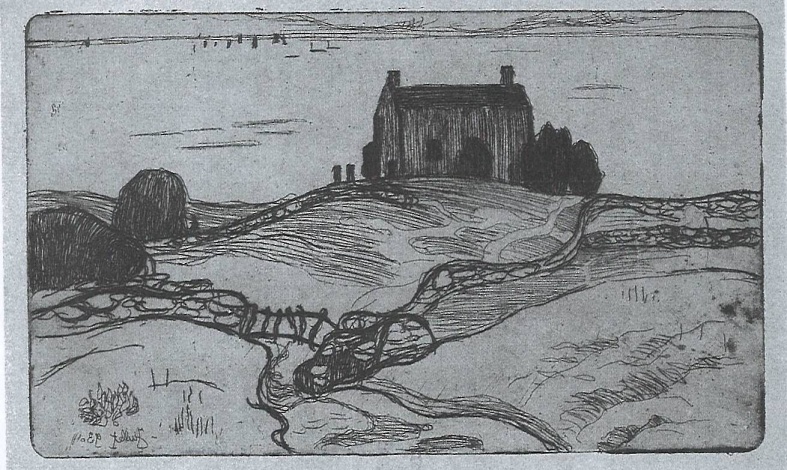 By 1889, Le Pouldu, 47 kilometres east of Pont-Aven, had become a favourite hideout for a number of artists of the Pont-Aven School. Its isolation, dramatic windswept coastline and lush pastures attracted not only Gauguin, but several other artists, who found that Pont-Aven had become too modern and crowded. Between 1889 and 1890 Gauguin, Serusier, Filiger and the Dutch painter Jacob Mayer de Haan, all stayed at La Buvette de la Plage, a small local inn owned by Marie Henry, right on the beach of Le Pouldu, a stone`s throw away from the house in the picture. Along with Mayer de Haan, Gauguin decorated the inn’s dining room with paintings and sculptures. (Gauguin’s wood carving of Mayer de Haan, intended for the mantle in the inn’s dining room, is now in the possession of the National Gallery of Canada.) Both men remained in Le Pouldu for the winter. After a short interlude in Paris in the spring of 1890, Gauguin returned to the village in the summer and stayed until November, now also accompanied by Sérusier and Filiger. The artists would capture varied facets of the Breton landscape, its isolated peasant houses, rolling farmland, craggy granite cliffs and sandy beaches as well as the rustic life of the local people. They mostly worked outdoors, sketching and making notes and then later paint their selected motives from memory. [4] 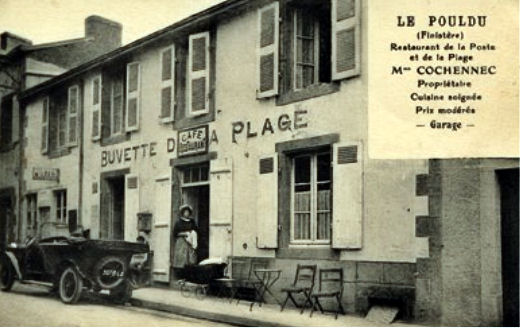 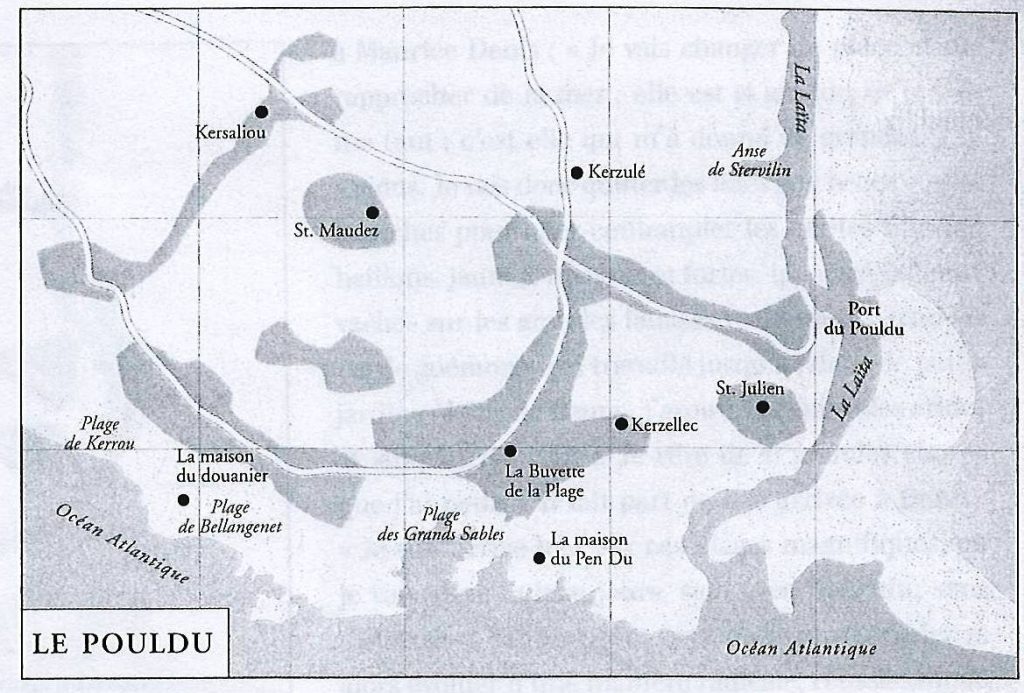 La Maison du Pen-du is painted in Gauguin’s typical Synthetist style, using lavish colours in two-dimensional, flat patches, with bold linear outlines. Gauguin’s expressive use of colour and linear designs were strongly influenced by both medieval art and Japanese woodblock prints, which he had encountered in Paris and in the company of van Gogh. He had his own small collection of Ukiyo-e and is said to have decorated his rooms in Brittany with them.[5] Gauguin’s painting style as well as his ambition to synthesize abstracted forms with emotional or spiritual experience, were a significant influence to the Nabis, a group of post-impressionist avantgarde painters that formed in France in the 1890s. One of its leading members, Maurice Denis, wrote the now legendary opening words to his  article “Definition du Neo-Traditionisme” in “Art et Critique”, Paris, in August 1890: “It is well to remember that a picture – before being a battle horse, a nude woman, or some anecdote – is essentially a plain surface covered with colours assembled in a certain order.”

Gauguin enjoyed the remoteness of Le Pouldu and the simplicity of its people, but he finally came to the conclusion, that he had to leave France behind in order to further develop artistically:

“My mind is made up, and since I’ve been in Brittany I’ve altered my decision somewhat. Even Madagascar is too near to the civilized world; I shall go to Tahiti and I hope to end my days there…My art… is only a seedling so far, and out there I hope to cultivate it for my own pleasure in its primitive and savage state.”[6]

As Gauguin moved on to the South Seas, the present painting ended up in the hands of the Paris dealer Georges Bernheim, from whom it was purchased by Jerome Stonborough, a wealthy  American industrialist of Jewish ancestry. In 1905, Stonborough married Margarethe Wittgenstein, sister of philosopher Ludwig Wittgenstein in Vienna, and the couple appointed Gustav Klimt to paint Margarethe’s portrait. It turned out to be one of the artist most celebrated works. 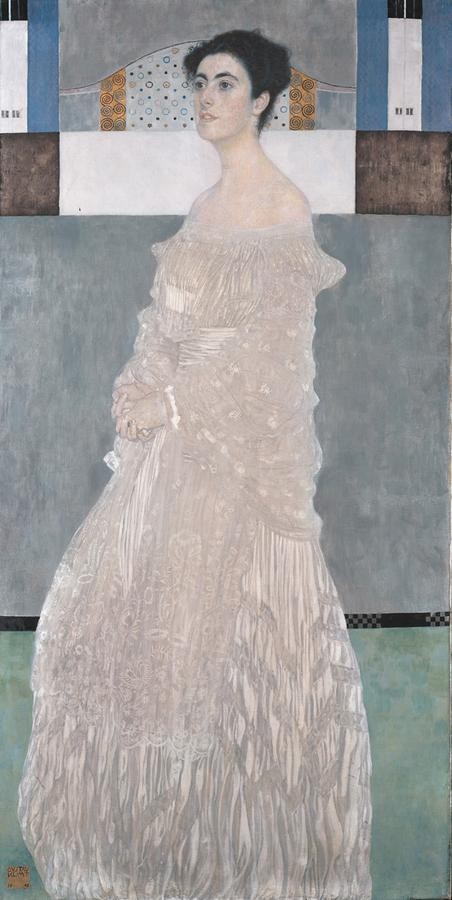 The Stonboroughs divorced in 1923. Margarethe commissioned her famous Haus Wittgenstein in Vienna three years later.  Jerome moved to Paris, where the La Maison du Pan-du most likely was on display at his home. He committed suicide in 1938. The painting was sold along with Stonborough’s entire art collection at Parke-Bernet Galleries, New York on 17 Oct., 1940 (lot 73). From then on, La Maison di Pan-du stayed in different North American collections until the present.