The Comité Caillebotte has confirmed the authenticity of this work.

Looking at Linge séchant, Petit Gennevilliers one almost feels the fresh breeze causing the white shirts on the clothesline to billow, flap and flutter like loose sails.

This airy picture is one of five works Caillebotte devoted to the motif of laundry drying on the line between 1888 and 1892[1], while residing at his retreat in Petit Gennevilliers, a bucolic hamlet, half an hour by train away from central Paris.
Caillebotte and his brother Martial had purchased the property in 1881, after selling the family estate in Yerres, which had inspired many of Caillebottes’ earlier works. Like neighbouring Argenteuil, where his good friend Monet had settled a decade earlier, Petit Genevilliers was a popular destination for Parisian day-trippers. Caillebotte’s passion for sailing and the vicinity of a yacht club had probably triggered the decision to buy a summer home on the banks of the Seine. In 1887, one year before the present painting was created, Caillebotte had made the retreat in Petit Genevilliers his primary residence, and the estate remained the artist’s principal inspiration until his premature death in 1894. He built a studio and greenhouse there, and planted extensive flower gardens. With his friend Monet – a famous gardener himself – he regularly corresponded about horticulture and the current state of bloom of their plantings.

Through his acquaintance to Monet, Renoir, Degas and other Impressionists, Caillebotte had become familiar with the principles of the movement. Fascinated by the Impressionits’s fresh ways of seeing and depicting the world, he became interested in working en plein air and experimenting with new topics.

Linge séchant, Petit Gennevilliers is a quintessential Impressionist work, successfully capturing a fleeting moment: the sunlight playing on the surface of the white linen dancing in the wind. Caillebotte’s choice of a rather unassuming subject matter is equally modern as the picture’s execution. The artist uses dynamic, sketchy brushstrokes to offset the billowing white linens against a diffuse background of a hazy sky, the pale blue water of the Seine, and the grass-lined path along the riverbank. A tree, a building and a barge (perhaps?) can be made out. It looks like Caillebotte worked fast and impulsively on this picture, probably working outside, right next to the clothesline. Shapes remain sketchy and indistinct; objects are only described and not finely executed, but the artist succeeds in capturing the magic of the moment.
Linge séchant, Petit Gennevilliers is a delightful exercise of translating light and movement into oil paint on canvas. It is a breath of fresh air. 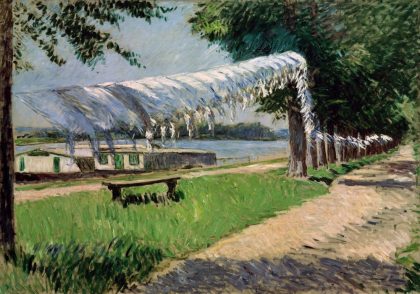