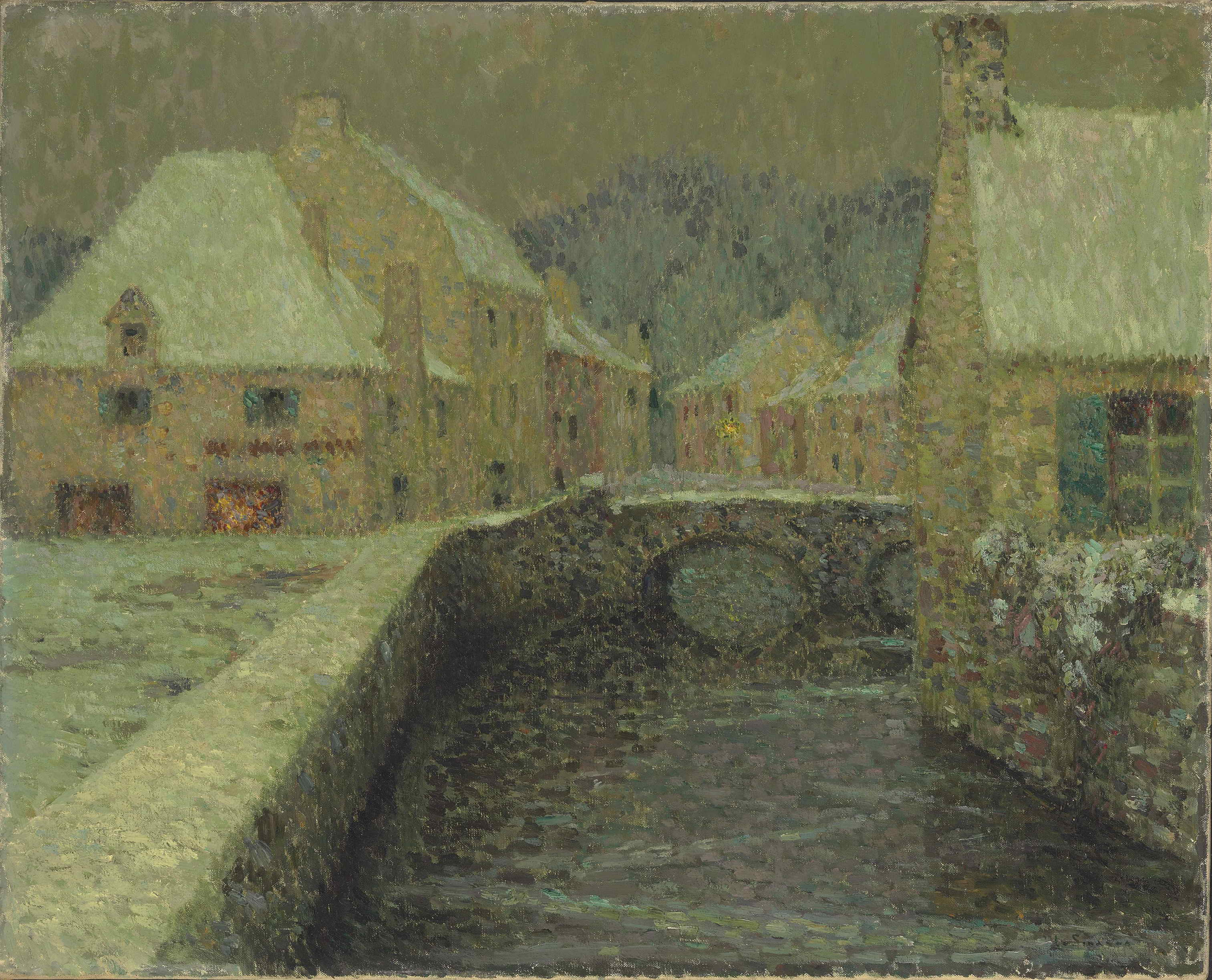 “This artist succeeds in conveying a sense of silence, and perhaps that is the reason why his canvases enthral us.[1]“
Émile Verhaeren

Views of small towns and villages in the fading light of dusk, almost always completely void of people, are a leitmotif of Henri Le Sidaner’s oeuvre. These atmospheric images, of which he composed many subtle variations throughout his career, emanate a deep sense of tranquility. Fellow artists Paul Signac noted: “His entire work is influenced by a taste for tender, soft and silent atmospheres. Gradually, he even went so far as to eliminate from his paintings all human figures, as if he feared that the slightest human presence might disturb their muffled silence.”[2]

As a young artist, before the turn of the century, Le Sidaner had been closely linked to the Symbolist movement, favouring ethereal motifs and dreamy settings. His most impressive Symbolist body of work is a series of moody depictions of Bruges ‒ dark and deserted views of a decaying town ‒  inspired by Georges Rodenbach’s novel Bruges-la-Morte (Dead City).

Another potent influence on Le Sidaner’s art was Claude Monet, whom he admired for his masterful treatment of light. The artists knew each other personally, and Le Sidaner visited Monet, who was more than 20 years his senior, in June 1918 at his famous water garden in Giverny. Monet’s garden inspired Le Sidaner to redesign his own estate in Gerberoy, creating a lush park of multiple levels on a hill with different sections dedicated to particular colours.

Between 1913 and 1923, Le Sidaner made several trips to Britanny, visiting the picturesque towns on the French Northwest coast, and repeatedly returning to Pont-Aven, which had been a popular artist colony since Paul Gauguin, Émile Bernard and Sérusier had worked there two decades earlier.  The present painting, executed in 1915, shows the stone bridge over the Aven River in the town’s centre. The street and roofs are dusted with a thin layer of snow, and the only hints of people’s presence are a single lit up shop-window and a street lantern further down the road. The painting is executed with a Pointillist brush in powdery, crepuscular tones, masterfully capturing the moment of the day, when all contours start to dissolve in the twilight.

The town of Pont-Aven hasn’t changed much. Today the same buildings shown in the painting are all still standing on the corner of rue Emile Bernard and rue des Abbès Tanguy. Le Sidaner had painted an almost identical view of this street corner two years earlier, in the autumn of 1913. The smaller oil painting, which belongs to the collection of the Singer Museum in Laren, shows the Pont Aven Bridge and its neighbouring houses from the same angle. The scene is also set in the evening twilight, showing the same illuminated street light and shop window on the left bank of the river. The foliage on the opposite shore and on the tall trees in the background glows in rusty–purple fall colours. 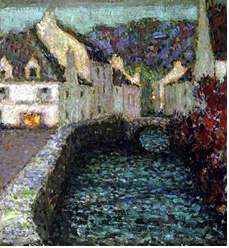 While many of Le Sidaner’s contemporaries tried to find artistic ways to capture the haste and hustle of modern urban life at the beginning of the 20th century, this artist retreated to a world of hushed poetic beauty, which he found in the small towns and villages of the French countryside ‒ a world and way of life that was about to disappear. Poet and art critic Camille Mauclair noted:  Le Sidaner “considered that the silent harmony of things is enough to evoke the presence of those who live among them. Indeed, such presences are felt through his works. Deserted they may be, but never empty.”[3]