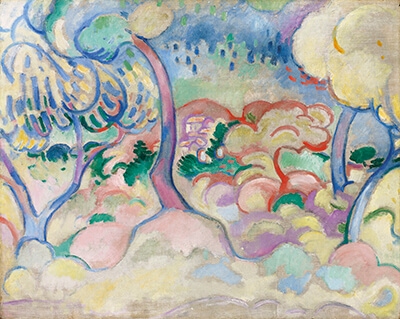 In the summer of 1906 Georges Braque and his friend and fellow-artist Othon Friesz, both then in their mid-20s, spent the summer in Antwerp, where they lodged at a cheap inn and rented a studio with a balcony overlooking the Scheldt River harbour. Here, Braque’s painting style emerged from conventional Impressionism to the use of brighter colours and more daring compositions. The year before he had met Henri Matisse and André Derain, who were both affiliated with the Fauves movement. The name, meaning “wild beasts”, was coined by an unimpressed art critic, Louis Vauxelles, referring to the bold palette and daring brushwork these artists had adopted. 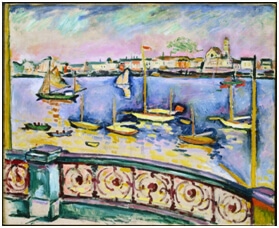 At the Salon des Indépendants in March 1907 Braque made his first public debut as Fauve artist and was able to sell all of his pictures in the exhibit. In May of that year he returned to the South of France to the small harbours of La Ciotat and L’ Estaque, near Marseille, where he – a Northerner–  was enchanted by the intensity of the Southern light, and produced mainly brightly coloured landscapes.

Braque painted Paysage à L’Estaque during the summer of 1907, while still under the influence of Fauvism, but also experimenting with various other stylistic methods. The present work was likely created in typical Fauve manner ‒ spontaneously, outdoors, in order to capture the landscape in a certain passing moment. It is executed with a rhythmic brush, and composed of organic, curvilinear shapes, recalling the Synthetist style of Paul Gauguin [2]. The lucid palette of pinks, pale blues and greens, dabs of yellow and bright red, applied in broad brush strokes, capture the glowing Mediterranean sunlight, and bring to mind the Divisionist works by Paul Signac and Edmond Cross[3].  Paysage à L’Estaque is a deeply poetic view of the Midi landscape, with almost musical undertones. Edwin Mullins counts the work among the most lyrical achievements of Fauvism [4].

Nonetheless, at the end of the summer of 1907 Braque’s two-year engagement with Fauvism had reached its limit: “It was impossible to make any further progress with the method adopted at that time. All those who have accomplished anything since have, to a greater or lesser degree according to their temperament, sought resistances….You can’t remain in a state of paroxysm.” [5]

Travelling back to Paris in October of 1907, Braque attended the landmark retrospective exhibition for Cézanne, who had died the previous year, and visited the studio of Pablo Picasso at the Bateau Lavoir, who was working on his iconic Demoiselles d’Avignon at the time. Both events had a lasting impact on Braque’s artistic development. He felt motivated to distance himself from Fauvism and its expressive use of colour, and put increased emphasis on the schematic structure of his paintings.

After returning to L’Estaque in the summer of 1908, Braque wouldn’t paint landscapes in the classical sense anymore, but instead put his focus on certain landscape elements: houses, trees and the well-known viaduct of L’Estaque. His new pictures had no horizon, no sky, and were executed with segmented brushstrokes in earthy greens and browns, inspired by Cézanne’s characteristic palette. Consisting of angular shapes, and paying no attention to ‘proper’ perspective, they showed stylized facets of the depicted objects from different viewpoints.

When Braque submitted six of his Cézanne-inspired works from L’Estaque to the jury of the Salon d’Automne in September of 1908, Matisse, who headed the jury, rejected them all, allegedly remarking that they were “full of little cubes” [6].  Braque was frustrated by the refusal, but soon landed a solo-show with up-and-coming art dealer Daniel Henry Kahnweiler at his Paris gallery on rue Vignon.  Louis Vauxelles, the critic who earlier had coined the term “Fauvism”, reviewed the show and complained: “(Braque) misunderstands form and reduces everything – sites and figures and houses, to geometric schemas, to cubes.” [7]
Braque’s new style had a new name: Cubism.

Paysage à L’Estaque was part of the groundbreaking show at the Kahnweiler gallery in November 1908. Stylistically, the painting can be between Braque’s Fauvist phase and his earliest Cubist works. It is an important document for the radical change Braque’s art underwent in the short period between 1906 and 1908, and his effort to find new means of artistic expression.