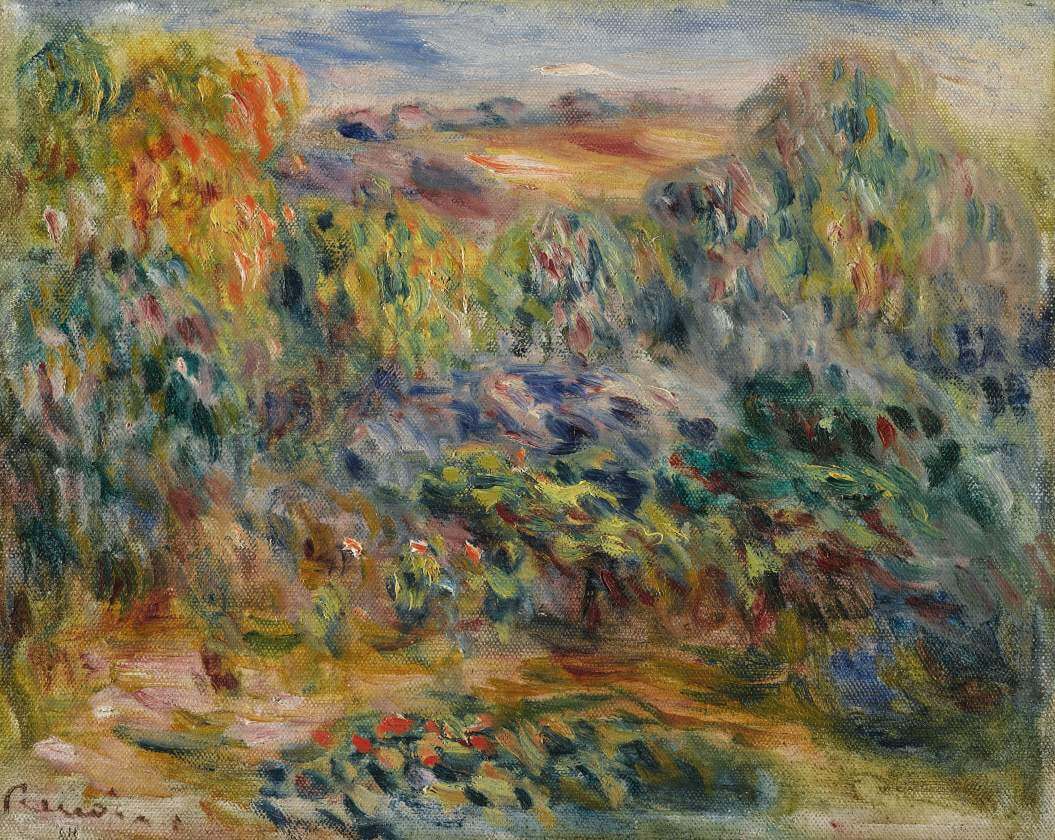 “Why shouldn’t art be pretty? There are enough unpleasant things in the world.”
Pierre-Auguste Renoir

In his later years, Renoir suffered from rheumatoid arthritis. Following his doctor’s advice to spend more time in a warmer climate, Renoir purchased a country house on the Côte d’Azur, in Cagnes-sur-Mer, near Nice, in 1907. The estate Les Collettes, with its picturesque olive and orange groves and stunning views of the surrounding countryside and the distant sea, inspired Renoir to many of his late landscape paintings. 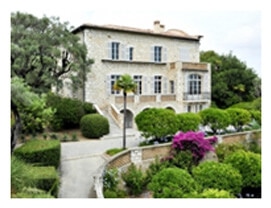 Although the title does not indicate the location of the landscape depicted in the present painting, the scenery can probably be identified as that of Cros-de-Cagnes. An undated painting by Renoir, in the collection of the Von-der-Heydt-Museum, Wuppertal, entitled Landscape near Cros-de Cagnes, shows a very similar view of the sunlit rolling hills, framed by lush vegetation. 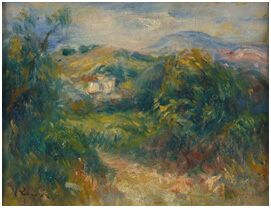 Rolling hills and the abundant foliage of shrubs and trees are rendered in luminous hues of blue, green, pink and orange; several houses can be made out on the horizon against the azure sky, or possibly the ocean.

At this point of his career, Renoir was less interested in depicting reality, making atmosphere and emotional effect his primary pictorial concern. “How difficult it is to find exactly the point where a painting must stop being an imitation of nature,” he pointed out to his friend, post-Impressionist painter Albert André.

By 1914, Renoir’s hands and legs were crippled by arthritis. He was bound to a wheelchair and is said to have worked with the brush tied to his fist. Despite the excruciating pain, painting must have caused him, he never stopped working until his death in 1919.

While WWI was raging in continental Europe, Les Colettes served Renoir as a sanctuary of peace, where he could immerse himself in timeless beauty. His son, film-maker Jean Renoir, pointed out that his father was “a display of fireworks to the end . . . freed from all theories, from all fears. His nudes and his roses declared to the men of this century, already deep in their task of destruction, the stability of the eternal balance of nature.”