Portrait Of A Man, Half-Length, Standing Before A Green Curtain 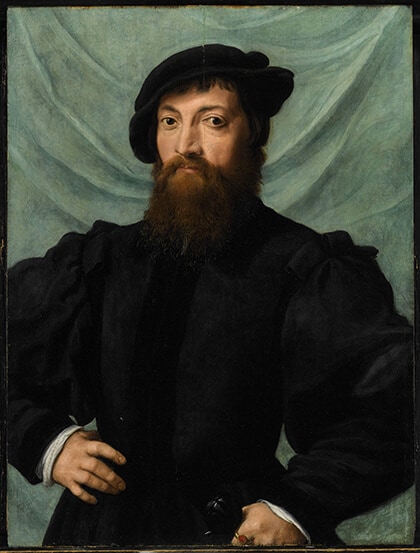 This imposing half-length portrait of a middle-aged man is unsigned and has been attributed to Flemish artists Antonis Mor, Jos van Cleve, and Willem Key in the past. Today, scholars agree, that stylistically, the picture comes closest to the works of Dutch master Jan Sanders van Hemessen. In terms of his religious and genre paintings, van Hemessen’s position as one of the leading Flemish artists of the 1530-40’s is undisputed. Research with regards to his role as a portraitist, however, is still relatively scarce, due to the small number works of this category that bear his signature. Dr. Peter van den Brink, who has examined the present portrait, dates it to circa 1540-45.

The depicted gentleman sports a full reddish-brown beard and is dressed in an elegant black cloak with voluminous puffed sleeves and a black beret. He confidently stands before a pale green drapery with his right arm akimbo and the left hand resting on the hilt of his sword. A gold ring with an oval carnelian intaglio adorns his left index finger – the only dot of vivid colour in an otherwise subdued palette. Unfortunately, the stone carving in the signet ring is not decipherable, as it could possibly identify the sitter. The man’s face is modeled with a high degree of naturalism, his nose is straight and pronounced, his beard a little frizzy, and his dark eyes are slightly bulging. He assertively fixates the viewer, but is gaze is gracious and without haughtiness.

The painting conveys an air of pathos, so it does not surprise, that in the past the sitter has been believed to be a king. While in the possession of Lord Castletown, the picture was thought to represent King Philip II of Spain. It was exhibited at The New Gallery, London, in 1890 along with a portrait of Queen Mary I, which was considered to be its pendant. The label of this exhibition is still preserved on the verso. While both pictures were attributed to Antonis Mor in the show’s catalogue, a handwritten inscription on the label reads ‘van Cleve’, followed by ‘Friedländer’ in brackets. This probably indicates, that the renowned art historian Max Friedländer (1867–1958) saw the painting in person and suggested an attribution to Jos van Cleve. Friedländer, however, did not include the work in his publication Early Netherlandish Painting (German: Die altniederländische Malerei). [1] 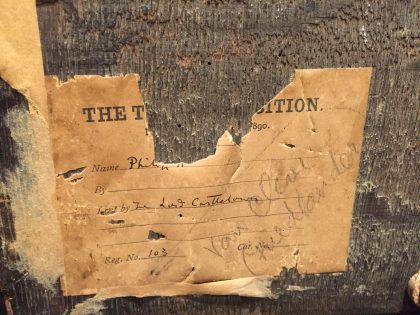 While in a sale at Sotheby’s in 2000, the present portrait was reattributed to Willem Key (1516-1568), and the current period frame still bears an engraved metal label with his name on the front. Konraad Jonckheere, however, rejected the attribution to Willem Key in his catalogue raisonné. [2]

The recent ascription to Jan Sanders van Hemessen is based on its similarity in composition, coloration and execution to several other male portraits by this artist.

A comparable painting of a gentleman by van Hemessen is preserved in the Kunsthistorische Museum, Vienna. It depicts a bearded sitter with slightly bulging eyes, all dressed in black, before a pale green background. The older man’s features are finely modeled. His facial expression is slightly irritated.
Another portrait in the possession of the same museum depicts a younger bearded man standing with his right hand akimbo. He is wearing a black beret and a red signet ring, and his direct glance into the viewer’s eyes is confident, serene, and engaging.
Aside from their formal similarities, both portraits in the Vienna museum display a similar level of naturalism as the present picture. In all three works, the men’s aura is dignified; their characters appear to be multifaceted and temperaments are subtly indicated. 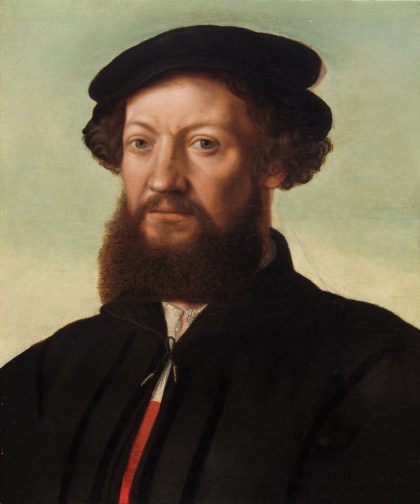 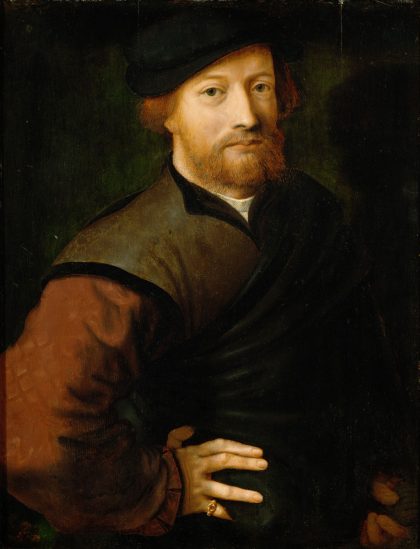 Jan Sanders Van Hemessen is well known for his fondness of lively, sometimes even grotesque gestures and facial expressions in his genre paintings and moralizing religious works. While traveling through Italy in the 1520s, he had extensively studied the intricacies of figural representation in the works of the antiquity, Michelangelo and Raphael. With regards to portraiture, Bronzino’s grandiose, highly polished depictions of Florentine nobility undoubtedly left a strong impression on van Hemessen. 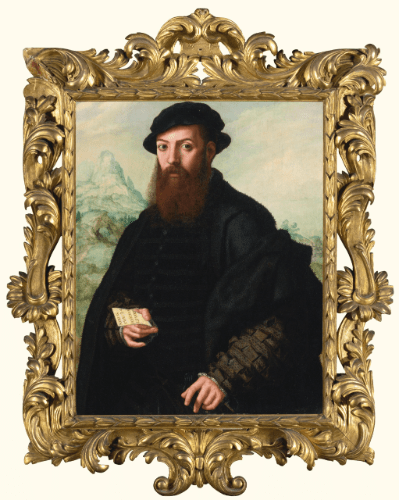 Portrait of a Bearded Gentleman, aged 34, Before an Extensive Landscape

Stamped on verso with the royal insignia of William, Prince of Orange (1792–1849)

Inventory number 178 etched into the reverse

The fine Portrait of a Bearded Gentleman, aged 34, Before an Extensive Landscape, which appeared on the art market in 2014, coming form the collection of the Earls of Warwick, has also been attributed to Jan Sanders van Hemessen. It is close to the present portrait with regards to its coloration, and the outstanding sensitivity applied in the representation of the sitter. Similar to the present portrait, a dark figure is placed before a pale green background, creating a dramatic contrast and sharp contours – a compositional feature unquestionably inspired by Bronzino. Face and attire of the younger man is executed in fine detail, and he appears to be of high position. His direct glance at the viewer is confident, but at the same time bears a hint of melancholy and inwardness.

Jan Sanders van Hemessen’s portraits are scant but the ones preserved are all accomplished products of a cosmopolitan artist, who strived to develop new methods of physical and psychological representation. In his art we see elegant features of the Italian Renaissance combined with a dose of earthy Northern realism. Although Hemessen’s sitters do not match Bronzino’s with respect to flamboyance and ‘grandezza’, elements of Bronzino’s sophistication are clearly perceptible in van Hemessen’s portraiture. The Flemish artist’s characters appear to be more sober and retstraint, but their subtly nuanced facial expressions reveal that Jan Sanders van Hemessen was an artist, who was gifted with sharp observational skills and sensitivity for psychological ambiguity.

Examination under infrared reflectography has exposed an underdrawing from an earlier composition in the present painting that was apparently abandoned. Viewed horizontally, it shows a table ledge with the leg of an object on top in the form of an animal’s paw, as well as columns and a curtain. 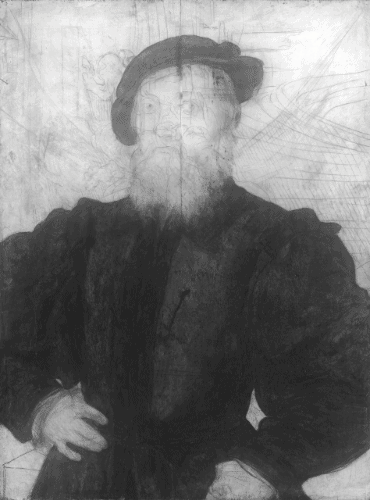