Rocky Landscape with Travellers on a Path, with a View of a Town, Believed to be Huy, in the Valley Beyond 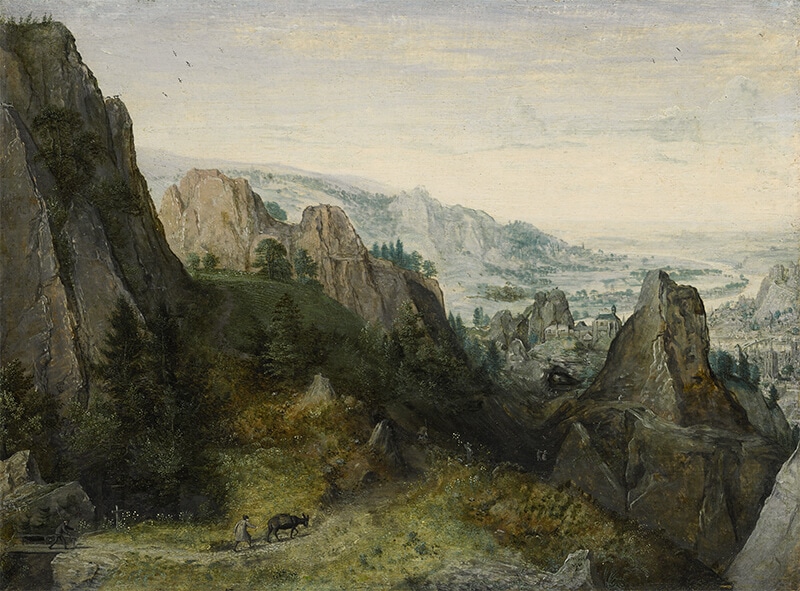 “Our minds are cheered beyond measure by the sight of paintings depicting the delightful countryside, harbours, fishing, hunting, swimming, the game of shepherds ‒ flowers and verdure … those who suffer from fever are offered much relief by the sight of painted fountains, rivers and running brooks.”
Leon Battista Alberti, De re aedificatoria, 14521When Alberti wrote these words in 1452, European visual artists were starting to rediscover landscape as a painting motif. During the Middle Ages painters had focussed exclusively on the depiction of human figures in religious context, and for centuries the natural world has had no place in European visual arts, whatsoever. With the advent of the Renaissance and a more curious world view emerging, people became increasingly interested in the natural world that surrounded them. It was the age of discovery.In the arts this new world view as well as the increasing urbanization of society, especially in the Low Countries, where by the 1600s almost three quarters of the population lived in cities, caused an increasing demand for secular subjects in painting. Patrons from the rising mercantile class requested art for their homes that reflected their lifestyle and therefore new genres such as still lifes and landscapes, preferably executed in modest formats, gained increasing popularity. While during the first half of the 16th century landscape still played a secondary role to the depiction of humans and their activities and served more or less as a ‘stage setting’ for biblical scenes, in the second half of the 16th century landscape became gradually accepted as an independent painting category. The Flemish artist Lucas van Valckenborch had considerable impact on this development.Landscapes, especially mountainous ones, play a central role in Valckenborch’s oeuvre throughout his career from his early period in the 1560s to his death in Frankfurt in 1597. Examples of this genre in the museum collections of Madrid, Vienna, Liechtenstein and Amsterdam follow more or less a similar layout:  high cliffs with spectacular rock formations occupy the left side of the image, diagonally cutting across the view over a vast river valley that leads the eye to a far horizon. In these types of paintings a town can usually be seen in the mist of the distance. Valckenborch liked to render the architectural elements in his compositions in meticulous detail ‒ castles, church spires, the tall tower of a massive cathedral, a bridge spanning the river ‒ which made them appear as if they were based on first-hand observations. Most of the cities in Valckenborch’s works, however, are believed to be products of his imagination, and only a handful of these depicted towns can actually be identified as specific places (e.g. Antwerp, Linz, Liège).

The city seen in the river valley of the present painting is believed to be Huy, which lies along the river Meuse in the Walloon region of Belgium. Lucas van Valckenborch spent several years in the region after leaving Mechelen in 1566, escaping the Dutch Revolt, an uprising of the northern, largely Protestant provinces of the Netherlands against the rule of the Roman Catholic King Philip II of Spain, which led to the so-called ‘Spanish Fury’, the pillaging of Dutch cities by Spanish troops. The artist first sought shelter with his family in Liège, which lies 40 km East of Huy, and later moved on to Aachen in Germany. Coming from the Low Countries, Lucas van Valckenborch probably saw mountains and rocky cliffs for the first time with his own eyes in the Meuse valley. In Mechelen, however, where he had established himself as a master painter with the Guild of St. Luke by 1560, he has had the chance to study the works of Pieter Brueghel the Elder (1528-1569) and Herri met de Bles (c. 1510 – c. 1555–1560), whose panoramic mountain landscapes Lucas admired and occasionally cited. These artists worked in the tradition of the so-called ‘world–landscapes’, a genre popular in early 16th century Flemish painting, which was mainly dominated by the artist Joachim Patinir (c. 1480 –1524), whose depictions of soaring landscape panoramas, seen from a high viewpoint, were typically used as a backdrops for religious themes. As Patinir’s sceneries were still pure images of the mind, Pieter Brueghel further developed the genre and added more naturalistic elements to his landscape compositions, which were clearly based on personal observations of the natural world around him. Brueghel is known to have traveled to Italy and across the Alps, where he produced numerous drawings along the way, of which he later worked elements into his paintings in oil. Lucas van Valckenborch, who knew Pieter Brueghel personally and highly respected his exceptional artistic skills, is known to have done the same. Karel von Mander, the so-called ‘Vasari of the North’, notes in his Schilder-Boeck (Book of Painters), that the brothers Lucas and Marten van Valckenborch along with painter Hans de Vries “moved to Liège and Aachen, where they worked from nature, as on the shores of the Meuse and in the surroundings of Liège one can find many pretty landscape motifs. And because the three ‒ especially Lucas ‒ played the German flute very well, they often amused themselves with that and were merry with each other.”

The present painting is a product of this phase in Lucas van Valckenborch’s life. It is signed with his monogram and dated on a rock in the foreground of the painting: 1570, VVL 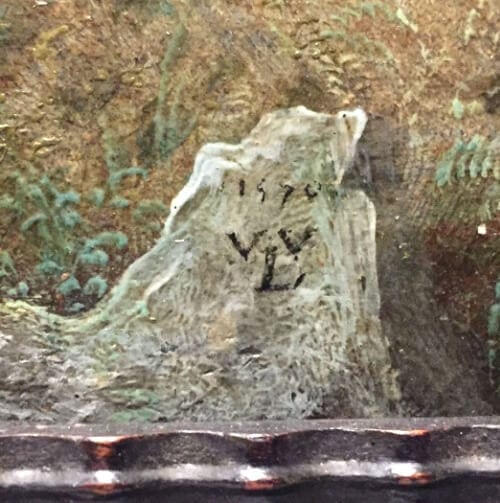 This makes it one of the first pure landscape paintings in Lucas van Valckenborch’s oeuvre. His earliest known works are dated 1567, one of them a view of Liège, owned by the Fine Arts Museum of Reims, France.  Another (undated) view of the city of Huy seen from a different angle by Valckenborch is located in the Royal Fine Arts Museum of Antwerp.

In the present painting the viewer`s eye is caught by a traveller in the foreground, a man rushing his donkey down a mountain path, wielding a stick, his animal carrying a heavy load in baskets on its back. The path is flanked by high cliffs and trees as well as two crosses, probably marking graves, and reminding the traveller of the dangers of the surrounding wilderness. There are other people sharing the same trail: a man equipped with a long stick or spear is crossing a bridge behind the man and donkey, one with a large basket loaded on his back walks ahead of them. Further down the valley the viewer makes out a peasant couple, working their field. A shepherd is watching over his herd on the hills in the distance. Several of his goats have climbed up to the on tops of the highest peaks. Further down the valley towards town men are working in a quarry. A castle lies just above it on the edge of a cliff, towering above a strikingly beautiful city ‒ Huy presumably, identified by its landmark arched bridge and Gothic cathedral ‒ stretching along both shores of the winding river Meuse. The mighty stream empties itself into a vast plain, the horizon blurred by a milky mist. Flocks of birds soar high over the entire scene.
Although often including topographically identifiable elements, Valckenborch`s compositions are known to be almost always a mix of truth and fiction. The artist masterly combines the awe-inspiring monumentality of the landscape with delightful vignettes form everyday life, inviting the viewer’s eyes to travel within the picture, to explore and to discover. Valckenborch’s paintings are never ‘landscape portraits’ like those of the plein air painters of the 19th and 20th centuries, but rather represent a view of the world as God’s creation and humankind’s humble place in it.

Interestingly, one of the most celebrated plein air painters of all time, Joseph Mallard William Turner (1775-1851) produced a gouache of Huy, seen from the South East: Birds-Eye View, in c. 1839, which is now in the possession of the Tate Gallery, London.

Turner‘s view of the city is surprisingly similar to Valckenborch’s, suggesting that the latter probably based the composition of the present painting on preparatory sketches he had made in situ.  In his gouache Turner takes almost the same position on Mont Picard, a cliff on the Southern shore of the Meuse, as his Flemish colleague 269 years earlier. His viewpoint, however, is situated a few steps closer to town and further to the east than Valckenborch’s. Obviously, the city has changed its face in the course of more than two and a half centuries, most notably with the added massive citadel on top of a cliff, which was erected in 1818, but the tower at the foot of the rock face, seen in both Turner’s and Valckenborch’s panoramas can be identified as Huy`s Notre Dame Collegiate Church.

Sketching from nature as a preparation for his paintings in oil was likely a vital part of Lucas Valckenborch’s working routine. There used to be a drawing by the artists of the city of Liège in the collection of the Kaiser-Friedrich-Museum in Berlin (destroyed during WWII) that obviously served as a preparatory sketch for the above mentioned painting of Liège in the Reims Museum collection. In another work, showing a magnificent panorama of Linz, owned today by the Städel Museum in Frankfurt, Lucas van Valckenborch actually depicts himself in the foreground, drawing in his sketchbook.

Although Valckenborch’s landscape paintings still feel ‘composed’ and ‘constructed’, his appreciation for reality and the natural world is obvious. The new attitude towards nature in the arts of Valckenborch’s era would finally open the way for a novel type of landscape painting evolving during the 17th century in the so-called ‘Dutch Golden Age’, with artists paying more and more attention to the accurate representation of specific places, the realistic depiction of landscape features, and the effects of weather and light. 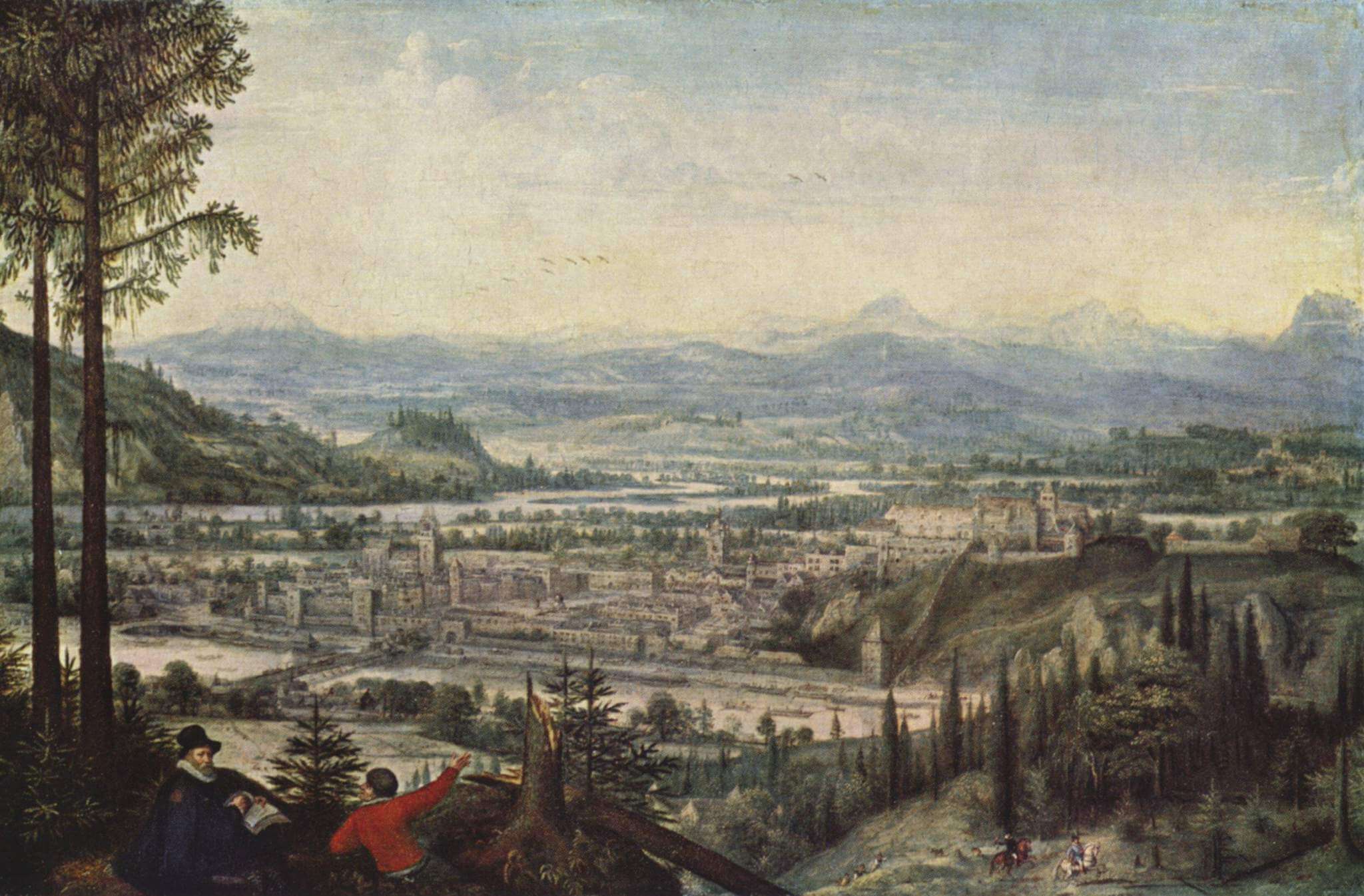