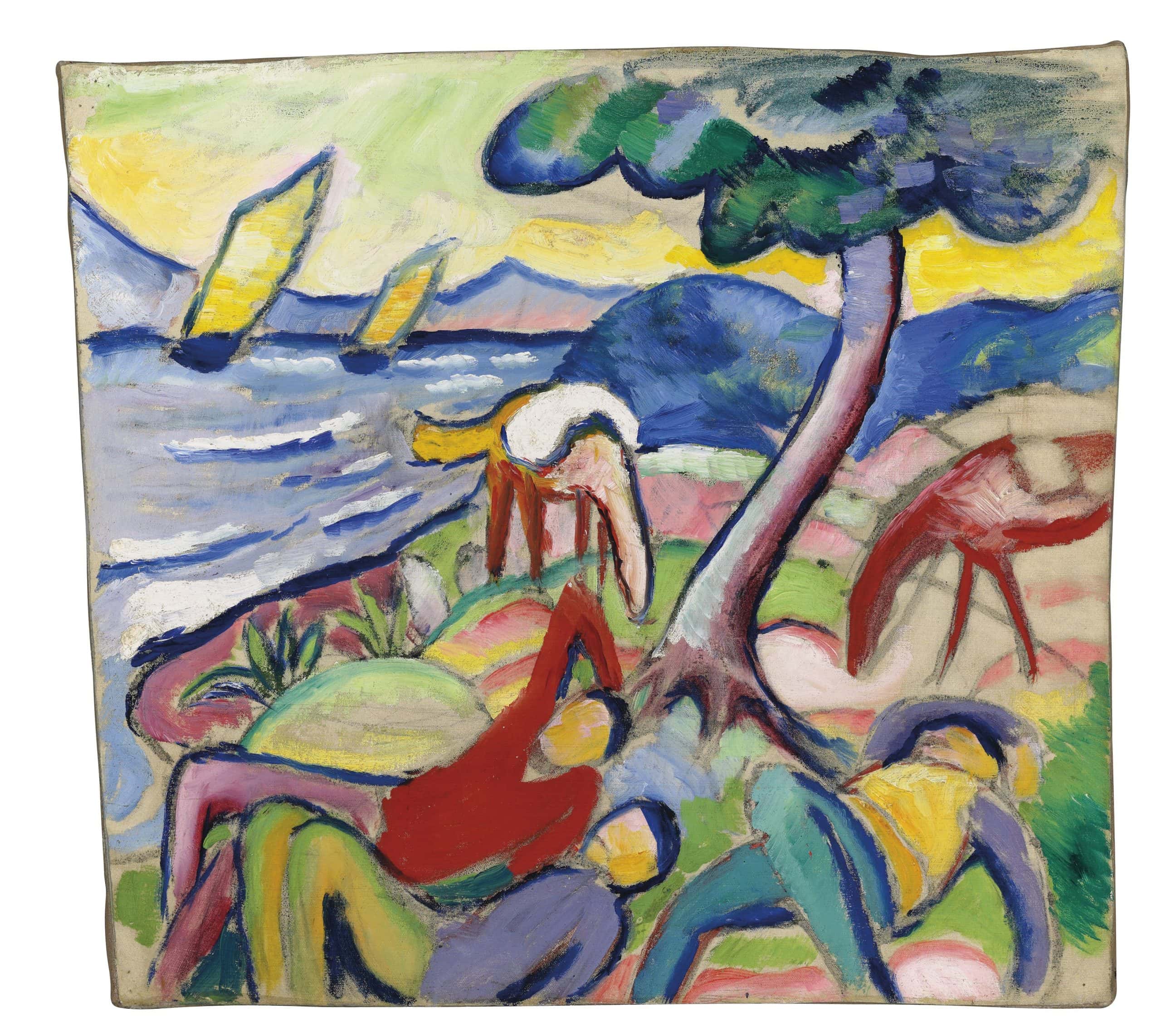 “A work of art is a metaphor; it is a thought, an independent thought of a human being, a song about the beauty of things. A work of art is the noble, multi-facetted expression of people, who are able to create more than the simple-minded expression: ‘that’s really beautiful’.“

In the fall of 1909 August Macke settled in a small hamlet on the shores of Lake Tegernsee in the German Alps and painted there for a year. He and his young wife Elizabeth, who was pregnant with their first child, were coming directly from Paris, where the couple had spent their honeymoon. For Macke it had not been his first visit to Paris, and he had fallen deeply in love with the City of Lights, where he considered “the whole world to be in one spot”.

“Life here is like paradise. Everything is here. Gardens, beautiful women, wonderful old men. Dreadful dogs, children, graceful like angels in heaven, and the air… (The weather) is better than summer at home. We stay near the Luxembourg Gardens, where old men walk around taming sparrows or play crocket. Boys play tennis on the paths, kids play diabolo and fly planes. Professors sit in the sun and work on their lectures. Painters sit around and paint […]
I think even the unhappy are happy to be here.”
During these weeks in Paris Macke took in as much art as possible. He visited art museums and private collections, particularly eager to study the paintings of the Barbizon school, the French Impressionists and Post-Impressionists. He also attended the Salon d’Automne, where he was deeply impressed by the works by the Fauves – especially Camoin, de Vlaminck, Manguin, Marquet and Matisse ‒ as well as the Futurists – Balla, Boccioni and Severini.

Twenty-three years old at the time, Macke seriously considered Paris as his base, and started looking for studio space in Montparnasse. But the high cost of big city living and complications with Elizabeth’s pregnancy eventually convinced the couple to take another, less glamorous option. In his letters Macke’s friend, the writer Wilhelm Schmidtbonn, was full of praise for Tegernsee`s magnificent lake and mountain scenery, its mild climate and simple, beautiful people. He urged August and Elizabeth to join him there, and eventually, on 27 October 1909, the couple boarded a train to Southern Bavaria.
Macke`s year in Tegernsee turned out to be one of the happiest, most productive phases of his life. “Everywhere stunning landscapes gaze into our windows; and we see them every day. We see the spruce trees, tall and covered in lichen, the mountains, the lake, snow-covered buds, waiting for spring. Also the cat. Dogs, horses, people. Through this constant togetherness one develops a great admiration for nature, and all it contains. … All the mountains, sun rays and animals are running though one’s body like electrical currents. I think, herein lies supreme happiness.”

Tegernsee‘s vicinity to Munich repeatedly brought Macke to the city, where he visited exhibitions by the art dealers Brakl and Thannhauser, who specialized in French Impressionist and Post-Impressionist painting and contemporary German art. In January of 1910, Macke discovered lithographs at Brakl’s that deeply moved him. He inquired about the artist and decided to pay him a visit right away. The producer of these lithographs was Franz Marc, and the men’s first encounter turned out to be the start of a close, life-long friendship.

“I think it is a real stroke of luck to finally meet a colleague with such insightful artistic attitude, ‒ rarissime! How happy I’d be, if we could manage to exhibit our pictures side by side one day.
Throughout the following year Marc and his fiancé Maria Frank frequently visited the Mackes at Tegernsee. Both men deeply respected each other’s talent and engaged in endless discussions about the function of painting and particularly the significance of colour. They enjoyed working side by side, and occasionally engaged in playful painting competitions, like the one, that produced the famous portrait of Franz Marc by Macke, owned today by the Nationalgalerie, Berlin.

The paintings of Henri Matisse particularly resonated with Macke, especially his landscapes and still-lifes, which he had seen not only in Paris, but also at an exhibition at Thannhauser’s gallery in Munich in 1910. Macke was taken by the extraordinary sensuousness of Matisse’s works and his masterful handling of colour and light:
“An absolutely glowing painter, inspired by sacred enthusiasm. It is absolutely convincing that he is supposed to be a very simple man.”
The present painting Sleeping Riders is executed in the Fauves spirit, with radiant colours, fluid lines and reduced detail. It depicts three figures resting under a tree on the windswept shores of Lake Tegernsee – an idyllic scene of joyful and carefree relaxation. Even the irregular shaped canvas reflects the artist`s light-hearted attitude. A drawing in purple coloured pencil on p.12 of Macke’s sketchbook no. 34 outlines the composition for the work in oil. 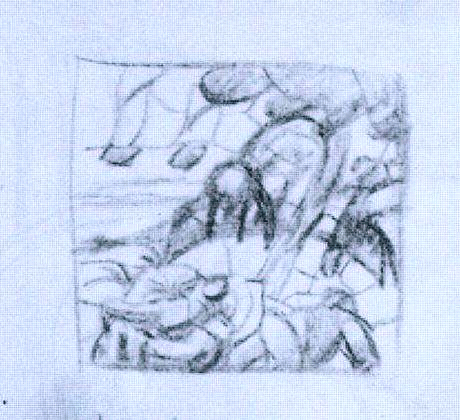 1910 was an extraordinary happy year for Macke – he was freshly married, and in April his first son Walter was born. His lust for life shines through not only in the present work, but many of his compositions of his Tegernsee phase: “Worlds open up in this tranquility. You look out of the widow. A tree twists, wreathes through the air. Is it doing it out of joy and why in this particular way? And when the sun shines onto the powerful branches, one feels as if hearing a tenor on a high note, who joyfully stands up on his big toe, to make himself larger. What a jubilation!“

1910 was also the year Macke was introduced to Wassily Kandinsky, Gabriele Münter and Alexej von Jawlensky through his friend Franz Marc. All lived and worked in Munich at the time; and in 1911 they would establish the avant-garde art group, Der Blaue Reiter (The Blue Rider), of which both Marc and Macke would become members. Macke, however, was less metaphysically interested than the other participants of the group, and he expressed his reservations regarding some of their ideas:
“Selflove, henpicked husbands and blindness play a big role in the Blue Rider group. Big words about the spiritual still ring in my ears. Kandinsky can say this personally and a lot more about reform. To me this is unsympathetic, especially after this exhibition. I advise you to work without thinking about the Blue Rider and blue horses too much.”
Until his premature death in 1914 ‒ he was killed in action during World War I at age 27 ‒ Macke’s approach to painting remained worldlier than Marc’s and Kandinsky’s. Macke’s intention was to depict the beauty of the visible world, focussing on the emotive quality of colour and harmony of form, rather than the spiritual in art.

In his eulogy to Macke, hid friend Franz Marc wrote:
“We painters know well, that with his passing, the passing of his harmonies, colour in German art will fade, whole sequences of colour will become paler and will develop a duller, drier sound. He gave a brighter and purer sound to colour than any of us, so bright and clear as his entire personality. Of course, Germany today has no idea, yet, what it owes to this young painter, how much he created and accomplished. Everything his skillful hands had touched and anybody who came close to him became alive, every material, but people even more: they were drawn to the magic appeal of his ideas.“

Sleeping Riders was acquired by Lothar Erdmann in 1913, who was not only a close friend of August Macke, but also married his widow in 1916, after Macke was shot on the Western Front during the first weeks of WWI. Erdmann, a Socialist, died in the concentration camp of Sachsenhausen in 1939.
Elisabeth Erdmann-Macke took care of her first husband’s body of work until her death in 1978, and successfully protected it from Nazi destruction during WWII, when Macke’s art was regarded “degenerate”. The present painting likely remained in her possession until it was sold to Cologne art dealer Aenne Abels in the 1950s.