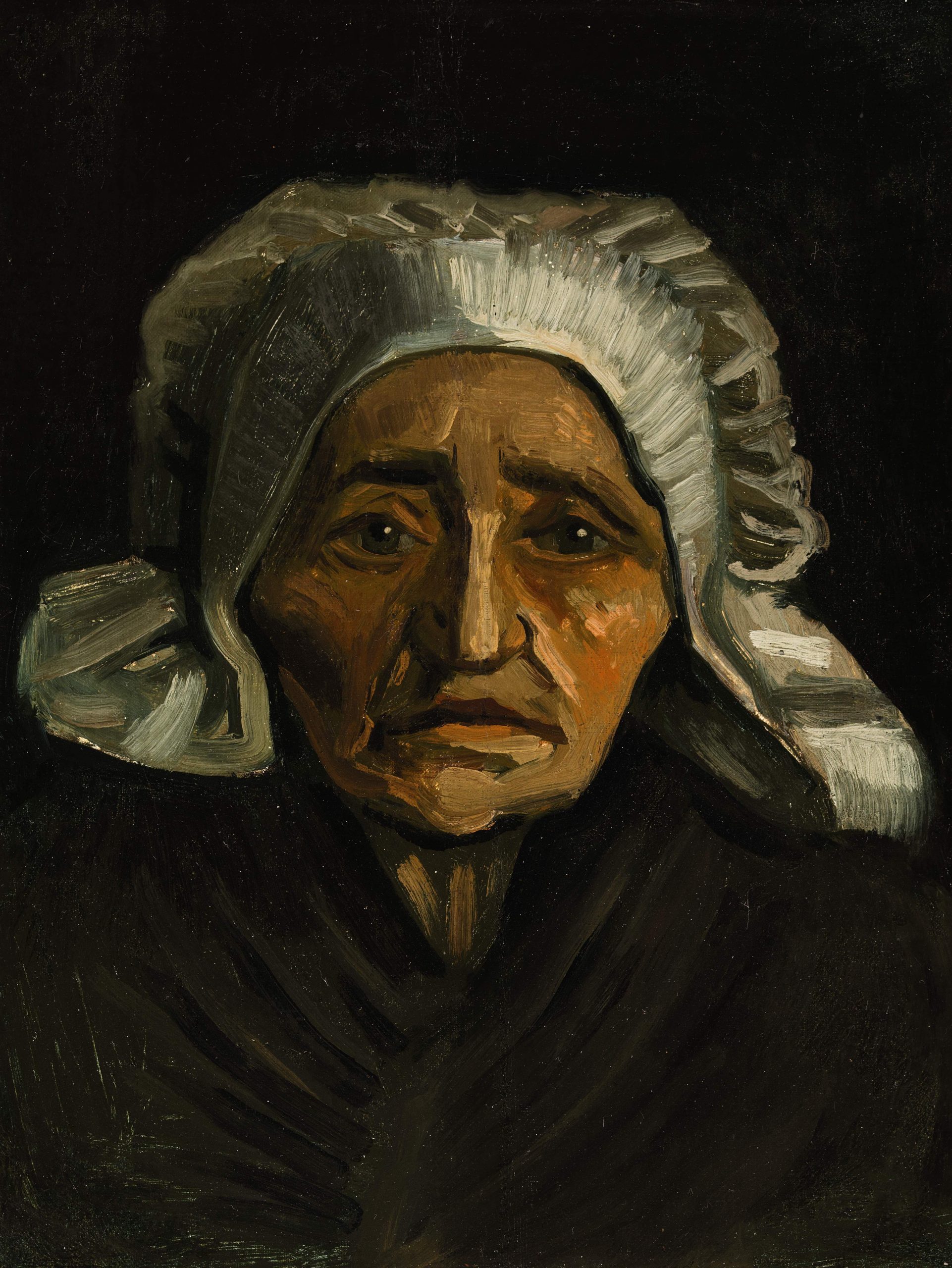 “… Anyone who would rather see insipidly pretty peasants can go ahead. For my part, I’m convinced that in the long run it produces better results to paint them in their coarseness than to introduce conventional sweetness … No ‒ one must paint the peasants as if one were one of them, as feeling, thinking as they do themselves.” Vincent Van Gogh in a letter to his brother Theo, Nuenen, Thursday, 30 April 1885 [Br. 1990: 501 | CL: 404]

In October 1884, while living with his parents in Nuenen, North Brabant, where his father held the post of a reverend, Van Gogh embarked on an ambitious project he called Heads of people[1], planning to produce studies of at last 50 local peasants and weavers. He had undertaken a similar project two years earlier in The Hague, which had been inspired by a series of the same name, published by Hubert von Herkomer in the periodical The Graphic. [2] Still at the beginning of his career, and convinced that he would eventually become a figure painter, Van Gogh regarded these studies as an essential preparation for his artistic development. During the fall of 1884, he was also in the company of friend and fellow artist Anthon van Rappard, who had himself been producing a series of head studies over the summer. Van Gogh’s models, men and women of different ages, are shown in close view, some frontal, some in full or three-quarter-profile. Sombre in mood and executed with thick paint and a bold brush in dark hues, these images reflect the sitters’ lives full of hardship and suffering. Van Gogh painted them usually in one sitting, right on the spot, in the poorly lit cottages, in which the models lived,  ‘wet into wet’, without under-drawing. Today 47 of Van Gogh’s head studies of Brabant peasants survive and can be dated between October 1884 and May 1885.[3] 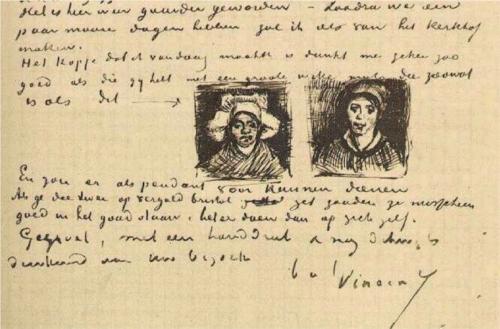 The present picture is undoubtedly one of the most evocative of the series. It shows an emaciated elderly woman in frontal view; her stern face is framed by a billowing white headdress (a so-called day cap), and her upper body wrapped in a coarse, dark shawl. Sad eyes gaze intensely from deep sockets and heavy lids towards the viewer, almost certainly reflecting Van Gogh’s own mental struggle, as well as his deep sense of isolation.

Closely related to the present picture, and possibly representing the same woman, is a portrait now owned by Von der Heydt Museum, Wuppertal [F 75, JH550]. Based on stylistic grounds,  Marije Vellekoop, Head of Collections, Research and Presentation at the Van Gogh Museum, Amsterdam, suggests that it was executed slightly earlier, dating Tête De Paysanne À La Coiffe Blanche between January and March 1885, shortly before the passing of Van Gogh’s father. 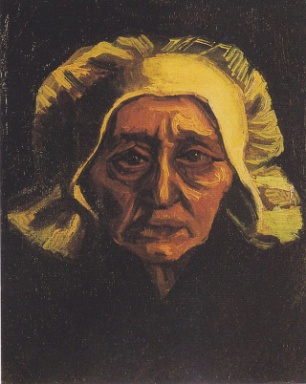 Very little is known about the identities of Van Gogh’s peasant models. He hardly ever mentions them in his letters to his brother, whom he kept informed about his progress with the project ‒ an indication that he was less interested in individual portraits, but rather the representation of types[4]. The only known model in the series is Gordina de Groot (1855-1927), a younger woman, whom Van Gogh painted several times, and who also appears in his iconic work The Potato Eaters of May 1885. She is said to have had a brief relationship with the artist. 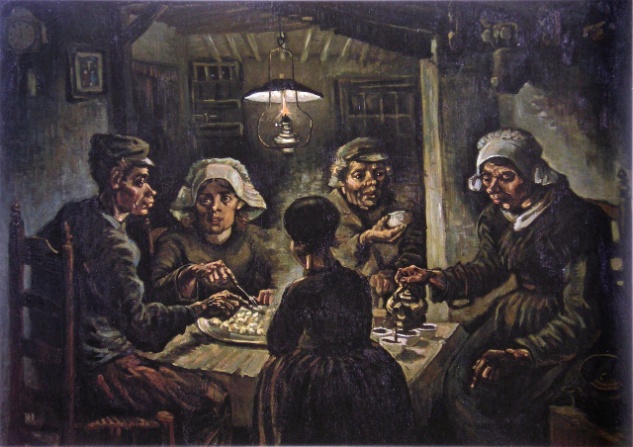 Van Gogh remarked about The Potato Eaters: “I had finished all the heads and even finished them with great care — but I quickly repainted them without mercy, and the colour they’re painted now is something like the colour of a really dusty potato, unpeeled of course. While I was doing it, I thought again about what has so rightly been said of Millet’s peasants — ‘His peasants seem to have been painted with the soil they sow’. A phrase I can’t help thinking of whenever I see them at work, outside as well as indoors.[5] 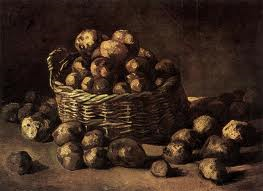 Aside from Millet, whom he greatly admired, Van Gogh was stylistically and technically strongly influenced by the art of his home country. Especially in his early career, the Hague School, to which he was introduced by his cousin Anton Mauve, and above all, Dutch old masters had a deep impact on his work. From his visit to the newly opened Rijksmuseum in Amsterdam in October 1885, he reported to his brother Theo: “What particularly struck me when I saw the old Dutch paintings again is that they were usually painted quickly. That these great masters like Hals, Rembrandt, Ruisdael — so many others — as far as possible just put it straight down — and didn’t come back to it so very much. And — this, too, please — that if it worked, they left it alone. Above all I admired hands by Rembrandt and Hals — hands that lived, but were not finished in the sense that people want to enforce nowadays. Particular hands in the Syndics even, in the Jewish bride, in Frans Hals. And heads, too — eyes, nose, mouth done with the first brushstrokes, without any sort of retouching.”[6] Although Van Gogh later moved away from the dark earthy tones of his Dutch years and converted to a much brighter, luminous palette in Southern France, he stayed true to his swift brush and thick impasto, as well as to his mission of representing simple working-class people, deeply rooted in their home soil, and in tune with their natural surroundings. Van Gogh called his 1888 portrait of the gardener Patience Escalier “an absolute continuation of certain studies of heads I did in Holland”.[7] 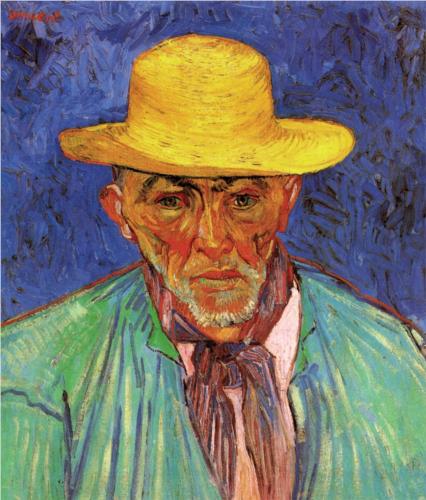 In a letter to his sister Willemien in 1890, just weeks before of his untimely death, Van Gogh summed up, what portraiture meant to him:

“What I’m most passionate about, much much more than all the rest in my profession – is the portrait, the modern portrait. I seek it by way of colour, and am certainly not alone in seeking it in this way. I would like, you see I’m far from saying that I can do all this, but anyway I’m aiming at it, I would like to do portraits which would look like apparitions to people a century later. So I don’t try to do us by photographic resemblance but by our passionate expressions, using as a means of expression and intensification of the character our science and modern taste for colour.”[8]

With these words Van Gogh refers to his famous portrait of Dr. Gachet as well as to one of the last portraits he painted of himself. However, they can equally be applied to Tête De Paysanne À La Coiffe Blanche. This arresting study of a simple peasant woman stands at the beginning of Van Gogh’s emotionally expressive and exceptionally powerful portraiture ‒ without question one of the strongest facets of his work. Moving to Antwerp in 1885, Van Gogh left Tête De Paysanne À La Coiffe Blanche behind in Nuenen, along with numerous other works, he had produced there. They were taken to Breda by his mother during the same year, but later forgotten. A number of Van Gogh’s studies of peasant heads resurfaced around 1902/03 and were purchased by the Galerie Oldenzeel in Rotterdam, where the present painting was acquired by the Amsterdam collector Henri van Kempen, who owned several other works by Van Gogh.