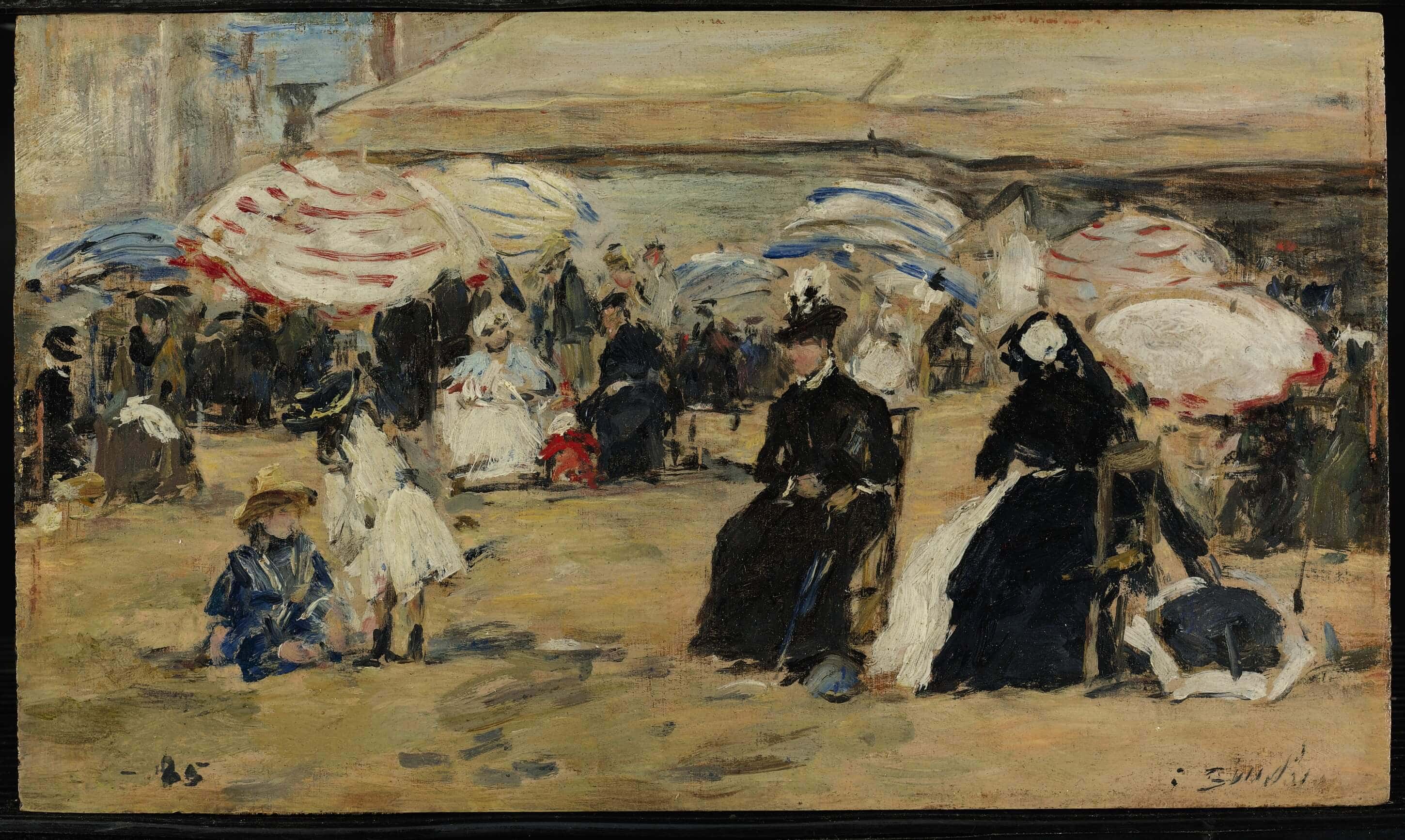 “I owe everything to Boudin and am grateful to him for my success.” [1]Claude Monet

Born as the son of a sailor in Honfleur, on the Normandy coast, and growing up working as a cabin boy on his father`s boat, it is of no surprise that Eugène Boudin was in love with the sea. In his seascapes and beach scenes, his main focus lies on the ever-changing elements: water, sky and light.

Among Boudin’s most favored subjects were the beaches of Trouville, where he would depict the wealthy Parisian bourgeoisie, who would flock to the sea for the summer holidays. Trouville became especially fashionable after the completion of the railway line between the capital and the channel coast in 1863. In numerous paintings, usually of a small horizontal format, Boudin captured the social gatherings of elegant vacationers on the beach, with ladies in crinoline skirts, taking in the views and the sun, protecting their porcelain teint with stylish hats and parasols.

The present work concentrates on a group of children, playing in the sand under brightly striped umbrellas, watched by their nanny and family. Paint is applied in quick brushstrokes, and figures in the background appear merely sketched. Black dominates the women’s clothing, accented by white, blue and red. Neither sea nor sky is visible in this painting, just the light canvas roofs of the beach houses in the background.

Scenes that almost feel like holiday snapshots, showing a modern society at leisure, painted with a swift brush and capturing the radiant light of a summer sky, make Boudin a pioneer of Impressionism. It was in fact Boudin, who introduced the young Claude Monet to open air painting. He was among the first French artists, who mainly worked outside, and when he met the 18 year-old Monet at an exhibition in Le Havre in 1858, he pointed out to him: “Three brushstrokes outdoors in nature are better than two days’ work at your easel!”
Ever grateful for Boudin’s advice and encouragement, Monet later invited the older man to take part in the first Impressionist exhibition in Paris in 1874.

Very much related to the present painting and a beautiful document of both artists’ friendship and collaboration is Claude Monet’s The Beach at Trouville, a small picture, painted in 1870, while Monet was on honeymoon with his wife Camille on the Channel coast. The couple was on their way to Britain to escape Paris during the Franco-Prussian war.
Showing Camille (on the left) and Boudin’s wife (on the right), formally dressed, sitting on the beach on wooden chairs and shading themselves with parasols, the painting owes very much to Boudin’s iconic beach scenes of Trouville. Grains of sand mixed in the picture’s surface are evidence for its execution en plein air.

[1] Monet in a letter to the critic Gustave Geoffroy in 1920, cited in The Janice H. Levin Collection of French Art,
edited by Richard Shone, Metropolitan Museum of Art, New York 2002, p.15