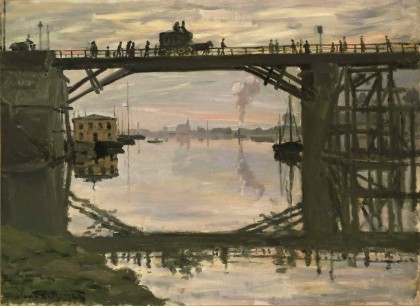 “Monet loves water, and it is his especial gift to portray its mobility and transparency, be it sea or river, grey or monotonous, or coloured

Born in Paris in 1840, Claude Monet spent his youth in Le Havre. As a teenager he earned a reputation for his accomplished satirical caricatures. Landscapist Eugène Boudin, known for his pictures of Normandy coast beaches and resorts, took the talented young man under his wings and introduced him to plein-air painting. After relocating to Paris in 1859, Monet befriended the artists Camille Pissarro, Alfred Sisley and Pierre-Auguste Renoir. By the late 1860s he and Renoir painted outdoors together, laying the foundations for Impressionism.
During the Franco-Prussian War Monet fled to London. After his return in 1871 he settled in Argenteuil, a picturesque hamlet close to Paris on the shores of the Seine. Most of Monet’s works from the 1870s depict his immediate surroundings, the scenery around the French capital and the leisure activities of Parisians. With broken, rhythmic brushstrokes in vivid colours Monet strived to capture the ever-changing effects of natural light. His work Impression, Sunrise, a loosely executed harbour scene, which he exhibited in Paris in 1874, drew scorn from the critics for its unfinished appearance and indistinct forms. It prompted them to mockingly label Monet and his fellow exhibitors as Impressionists. Monet stayed true to his Impressionist values throughout his career, rejecting conventional European principles of composition, colour, and perspective. Determined to capture nature more accurately in his own way, he worked outdoors, directly onto large canvases, using light-colored primers and vibrant colours, disregarding linear perspective and three-dimensional modeling.
In 1883 the artist settled in Giverny, where he focused on establishing a lavish garden. By the 1890s he began producing paintings in series, depicting the same motif at different times of the day under various light conditions. His late works, mostly renderings of his water lily ponds in Giverny, are vibrant pools of colour, almost completely devoid of any form. Claude Monet died in 1926 as a well-respected and wealthy man in Giverny. His idiosyncratic style transformed French painting in the last three decades of the nineteenth century and laid the foundations for twentieth-century modernism.