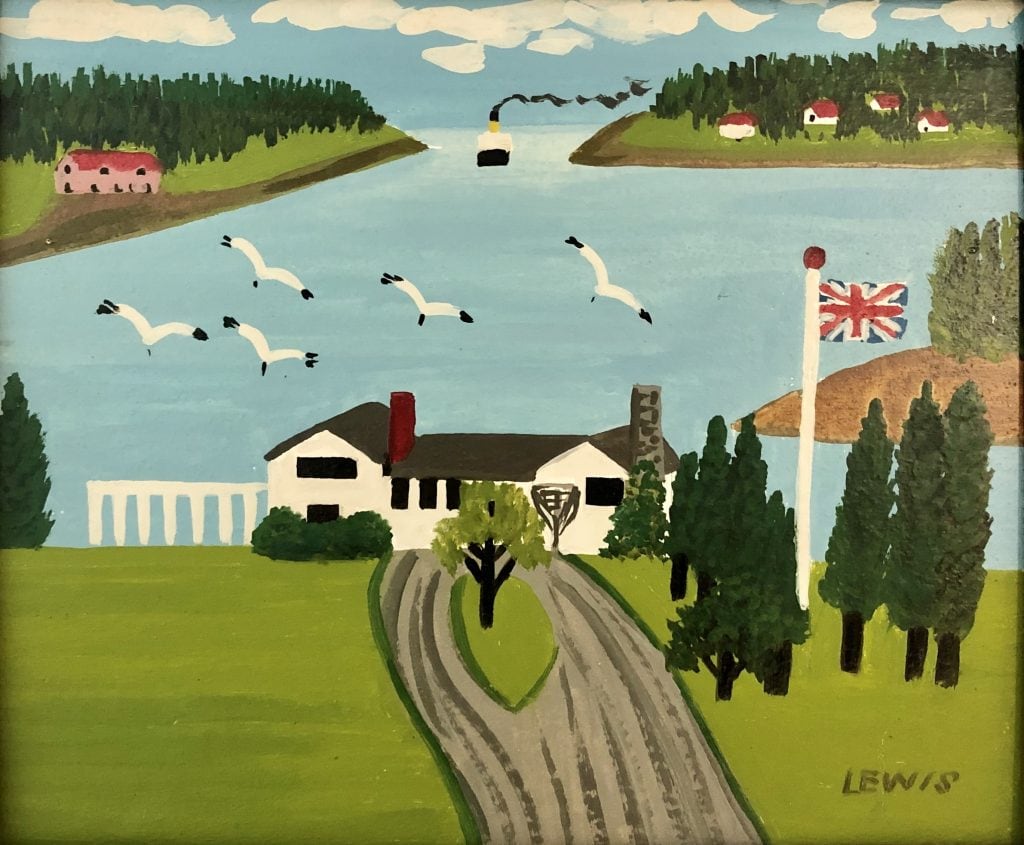 Maud Lewis was born in Yarmouth, Nova Scotia, Canada. She was of unusually small stature and suffered from a number of birth defects that left her hands deformed and her shoulders hunched. As a young girl, Maud learned to play the piano and she painted Christmas cards with her mother, which they would sell locally. Her relatively isolated, but happy and moderately prosperous life took a tragic turn, when her parents both passed away in the mid-1930s. Her older brother inherited the family home and sent Maud away to live with her aunt in Digby on the west coast of Nova Scotia. Lewis had a child out of wedlock, which was put up for adoption. In 1938, Maud met Everett Lewis, a fish peddler, whom she married in 1938, after briefly working for him as a housekeeper. The couple lived in poverty in Marshalltown, near Digby, occupying a tiny one-room cabin, lacking plumbing and electricity. Maud, who never lost her sunny disposition, lovingly decorated the dwelling with her exuberant paintings – naive depictions of country life, animals, and landscapes, which she painted in bright colours on particleboard, cardboard or wallpaper. The couple sold these paintings to tourists by the roadside of their cottage for a few dollars.
Maud Lewis lived and painted in relative obscurity until 1965, when she received nationwide attention through a CBC documentary and a newspaper article in the Toronto Star. This publicity caused a surge of interest for Lewis’s art, even beyond Canada’s borders; the American president Richard Nixon being among her international patrons. Lewis became an icon of the folk art movement – Canada’s very own Grandma Moses.
When Maud died in 1970, however, she was laid to rest in child’s casket and buried in a pauper’s grave. Her husband Everett, a notorious miser, who apparently hid the profits of her art sales under the floorboards of their house, was murdered in 1979 by an intruder, who was looking for money. Maud Lewis’ charmingly decorated house was eventually purchased and restored by the Art Gallery of Nova Scotia in Halifax, where it is on display today.