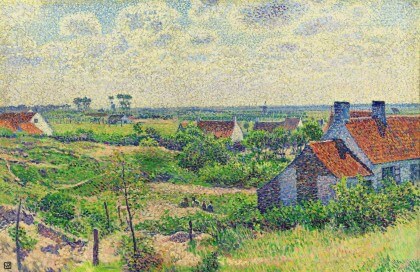 Theo van Rysselberghe painted Paysage avec Maisons in 1894, while spending the summer in the seaside resort of Knokke, Belgium, with his fatherly friend Camille Pissarro. Pissarro 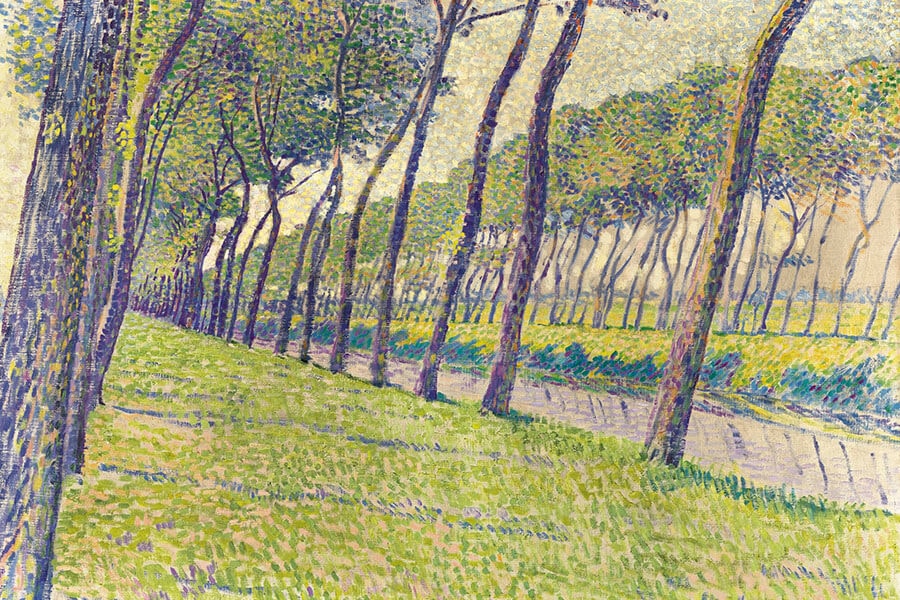 To synthesize the landscape into a definitive aspect that perpetuates one’s sensation of it, that is the task the neo-impressionist have set for themselves. Félix

Theo van Rysselberghe (1862 – 1926)
Belgian artist Théophile van Rysselberghe studied in Ghent and Brussels, and was among the founding members of the Belgian avantgarde art group ‘Les XX’ (The Twenty’) in the late 19th century. His early work was influenced by Orientalism, the French Impressionists and the work of American artists James McNeill Whistler.

After seeing Georges Seurat’s monumental canvas Sunday Afternoon on the Ile de la Grande Jatte in Paris in 1886, Rysselberghe adopted the Pointillist style. He formed a close friendship with Paul Signac, one of Seurat’s closest followers. During the 1890s both men frequently worked together and Rysselberghe spent a lot of time at Signac’s summer house in Saint Tropez. During this period, Rysselberghe produced a series of light-filled land- and seascapes, using countless tiny dots of complementary colours, which lend his paintings an exceptional glow and vibrancy.

Rysselberghe eventually turned away from Pointillism in 1904. Later in his career he focused on portraiture, decorative murals, nudes and sculpture. He died in France in 1926.