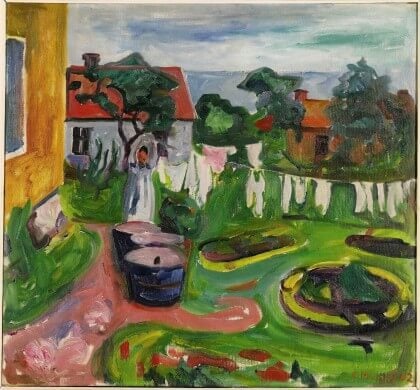 Clothes on a Line in Åsgårdstrand

Åsgårdstrand, on the western shore of the Oslofjord, south west of the Norwegian capital, had been Edvard Munch’s summer retreat for many years. The picturesque

Edvard Munch (1863-1944)
Edvard Munch was born in Loten, Norway, in 1863. During adolescence, he lost both his mother and one of his sisters to tuberculosis. While training as an engineer in Christiana (Oslo), he decided to become an artist in 1881.

Munch`s early oeuvre shows influence of the Impressionists. After extended visits to Paris in 1885 and 1889, where he first saw works by van Gogh, Gauguin and the French Symbolists, Munch developed his own artistic language. Using vibrant colours and flowing lines to express emotions, Munch’s paintings primarily deal with dark themes: anguish, tragedy, mortality and sexuality. His most famous paintings, The Scream – of which he made several versions – has become an icon of Modern art.

Between 1892 and 1908, Munch lived and worked mainly in Germany, paying frequent visits to Norway, France and Italy. After a nervous breakdown 1908-9, he returned to Norway where he spent the rest of his life living alone on his farm in Ekely, focusing on mural painting and more optimistic themes. Munch died near Oslo in 1944. He is regarded as a forerunner of Expressionism.